IBEX 35, CAC 40 Forecast: Treading on Water as Europe Struggles to Contain the Virus

The general trend in European equities remains pretty much unchanged to finish this shortened week as most major indices are just shy off recent highs but are struggling to push any higher. The recent outbreak of the third-wave of the Covid-19 pandemic has made investors worry about the effects that delaying the re-opening of countries will have on economic recovery, but markets are turning somewhat of a blind eye to this situation given the large amount of stimulus going into the US economy, which is spilling over into Europe.

Another positive note is the improving economic data coming out of the US and China, which is aiding positive sentiment as the economic outlook for the two major economies is improving. That said, this improved outlook is also causing investors to believe the Federal Reserve will have to take action quicker than expected to control an overheated economy once inflation shoots up, which is keeping bond yields on the move higher, dampening stock performance.

With regards to the pandemic in Europe, France has imposed a new 4-week national lockdown after the country suffered its worst rise in new Covid-19 cases since November last year, with the average figure coming in at around 40,000 new cases on a daily basis, which has caused the government to change tactics given it had only imposed regional measures up until now in trying to aid the economy whilst controlling the spread of the virus, but he has seemingly run out of options. 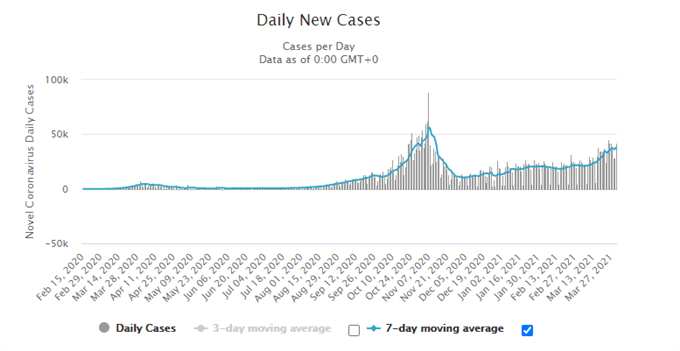 The increase in new cases is pretty much a common theme in most of Europe, with new variants being the main cause of this rapid increase in the spread of the virus.

The situation in Spain seems to be much more under control at present, although the national average has increased slightly and has put the national government on high alert going into the Easter weekend. Movements between regions are forbidden in the next few days but there is still a high risk that new restrictive measures will have to be put in place after Easter as new cases are likely to rise. The hospitality and tourism sector, one of the biggest in Spain, was hoping that the Easter holidays would provide good relief to the awful 12 months they’ve had so far, but the restriction in movement between the country means another blow to the Spanish economy, with a very uncertain summer season leaving many investors on high alert.

The IBEX 35 is just shy of the recent highs seen on March 15th but buyers are struggling to garner further upside momentum to bring the index higher. The fall below the ascending trendline in the last two weeks is making the consolidation of bullish pressure harder to achieve, so expect the index to be rather sluggish until it is able to push above 8,800, which would, in turn, mean a new yearly high. Looking at momentum indicators, I wouldn’t be surprised if the IBEX 35 consolidates around current levels before attempting a new push higher. We might even see a good pullback to attract new buyers into the market. If so, look at the 61.8% Fibonacci at 8,450 for immediate support before focusing on the 8,000 horizontal line.

Recommended by Daniela Sabin Hathorn
Trading Forex News: The Strategy
Get My Guide

Overall the CAC 40 has outperformed the IBEX 35 in the recovery from the pandemic lows but its growth has stagnated in recent weeks as it has reached a new yearly high. The weekly chart shows this clear resistance at the February 2020 high (6111) that the French index has been unsuccessfully trying to surpass for the last 4 weeks. Momentum has turned positive again this week but the bullish trend is becoming fatigued and overstretched, so a bearish reversal may be needed to gather more strength and break the barrier.

To the downside, there are two clear support areas in place. One is the 5,700 line where selling pressure has been capped since mid-February, and the other one is the 5,312 line which has held the support for the CAC 40 since November 2020. Again, like with the IBEX 35, we may see sideways consolidation before a meaningful break in either direction is achieved.