The Bank of Canada’s March policy decision came in as expected, with interest rates held steady and asset purchases unchanged. The accompanying statement recognized the resilience of the Canadian economy and stronger than expected economic growth, while also noting that considerable slack and a great deal of uncertainty remains. The BoC Governing Council noted that despite improvements in the economic outlook, “the recovery continues to require extraordinary support.”

The statement also reaffirmed that the BoC’s QE program will continue until the recovery is “well underway” and that as the Governing Council gains confidence in the strength of the recovery, the pace of purchases will be adjusted. The Canadian Dollar weakened in the immediate aftermath of the statement, as the Governing Council maintained a more cautious tone than related economic data may have suggested. 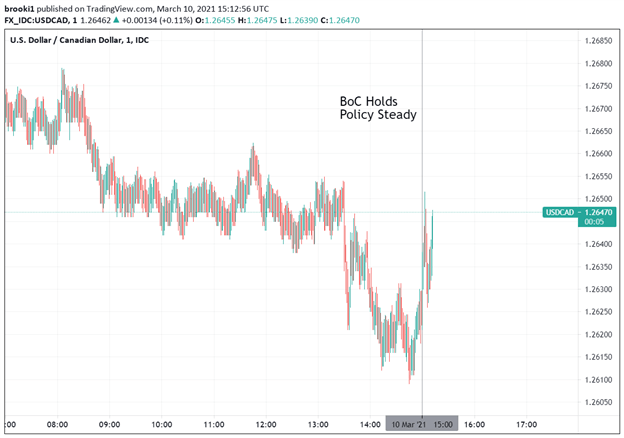 Economists expect the BoC’s next move to be a tapering in asset purchases, with an announcement coming as soon as the April policy meeting. Gov. Macklem recently spoke of “some signs of excess exuberance” in the housing market, but he also reaffirmed that a full recovery remains far away and that monetary policy will have to provide stimulus “for a considerable period.”

The BoC’s statement noted that the spread of new virus variants pose large downside risks to activity. While vaccination rollouts are providing a light at the end of the tunnel around the world, Canada’s rollout has disappointed so far. Canada has administrated around 3,000,000 vaccinations in total, compared to the United States, which has averaged over 2,000,000 doses administrated per day in the last week.

Despite vaccination challenges, it is clear that the Canadian economy is faring better than BoC officials have projected. Winter lockdowns had a far less severe impact than their spring 2020 counterparts. Canadian Q4 GDP printed at 9.6% vs. the BoC’s forecast of only 4.8%. Data also suggests that the Canadian economy grew by 0.5% in January, shedding doubts on the BoC’s estimates for a 2.5% contraction in Q1 GDP. The US stimulus bill that is likely to be passed this week will also provide a tailwind to the neighboring Canadian economy.

Projections in the Bank’s January monetary policy report were also based around the assumption that oil prices would remain unchanged near $50 for Brent and West Texas Intermediate. In actuality, oil rallied through February, rising from around $52 to over $60. OPEC+’s March decision to hold output steady has further buoyed oil prices. The Canadian Dollar has already reacted strongly to the resurgence in oil prices, as the two are closely correlated. Further strength from the Canadian Dollar may be tied to future oil price action. 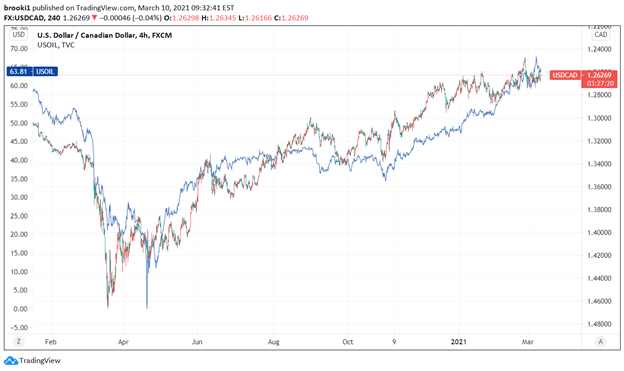