Asia-Pacific equities kicked off the week with a sour tone as Wall Street equities closed sharply lower on Friday. The S&P 500, Dow Jones and Nasdaq Composite lost -1.93%, -2.03% and -2.00% respectively, with almost 93% of stocks finishing lower. A battle between retail traders and hedge funds over several heavily-shorted US stocks appeared to have catalyzed a volatility spike and subsequently a stock market pullback. But a deeper look may suggest that market valuations had reached an unsustainable level that the time was ripe for a correction. Almost anything could have been taken as a trigger for that.

In the currency market, the risk-linked Australian, New Zealand Dollars as well as the Norwegian Krone are among the worst performing G10 members, suggesting that ‘risk-off’ sentiment is dominating. Silver prices gapped 6% higher as it was perceived as one of the new targets by Wallstreetbets day traders who have pushed up the price of GameStop and AMC Entertainment recently. Silver prices have surged 15% since last Wednesday. During the same period, gold prices have only advanced 0.8%, suggesting that silver’s rally might be a stand-along case driven by speculative activity and might not have a significant impact on other precious metals.

Stock marketsappear to have priced in lofty optimism about the Covid-19 vaccine rollout, fiscal stimulus, reflation and another seemingly upbeat earnings season, while mutant viral strains and extended lockdown measures around the globe may suggest a slower pace of growth in the months to come. The December NBS China manufacturing PMI reading came in at 51.3 on Sunday, lower than the baseline forecast of 51.6, and marked a second month of slowdown in the pace of expansion. This might be attributed to moderated export demand as well as Covid-related restrictions that affected production and operation. 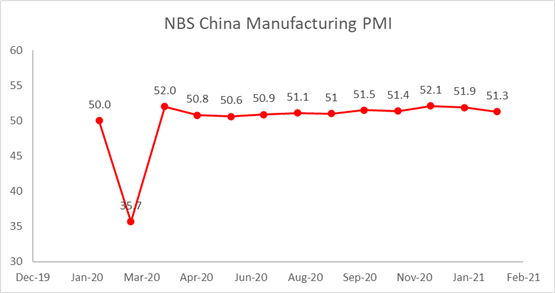 Traders are facing a busy week ahead in terms of macro events: US Markit Manufacturing PMI, Euro Area Q4 GDP and core inflation, China Caixin Service PMI, BoE interest rate decision and the US nonfarm payrolls report are in focus. Find out more from DailyFX calendar.

Upbeat US Q4 earnings may help to limit the depth of the stock markets’ pullback. So far, 37% of the S&P 500 companies have released their results, with 82% of them beating analysts’ forecasts. The information technology, healthcare and financials sectors have outperformed with the highest percentage of positive earnings surprises, while utilities, energy and real estate sectors lagged behind, according to data compiled by Factset.

In the week ahead, around 22% of S&P 500 companies will release their results, including Pfizer, Exxon, Alphabet, Amazon, PayPal, eBay and Ford Motor. Read more on my earnings outlook report. 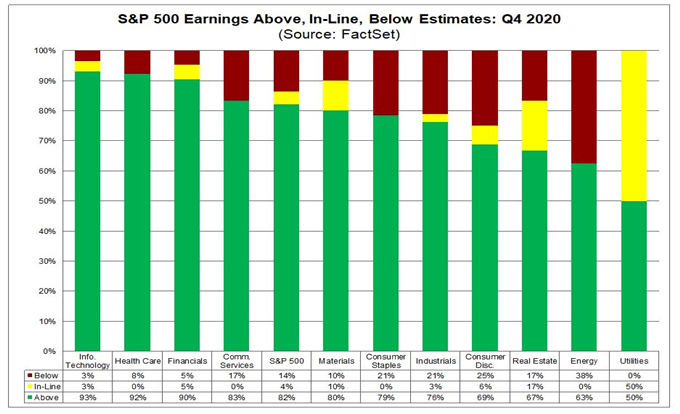 Technically, the S&P 500 index has broken the “Ascending Channel” formed since early November and thus may open the door for further downside potential. The near-term trend has likely tuned bearish after price broke the 20-Day SMA and 50-Day decisively. Immediate support levels can be found at 3,705 (50% Fibonacci extension) and then 3,660 (38.2% Fibonacci extension). The MACD indicator has formed a bearish crossover and has trended lower since, reflecting that the bears are probably taking control.

The ASX 200 index is testing an immediate support level at 6,530, which is the bottom of a range-bound zone that it was trading within for the past few months (chart below). Price has broken the 20- and 50-Day SMA lines decisively, reflecting strong selling pressure. Widening Bollinger Band width suggests that volatility is picking up, and downward pressure could gain momentum if price breaks the 6,530 support. An immediate support level can be found at 6,480 – the 100-Day SMA.

The Hang Seng Index failed to break a psychological resistance level at 30,000 and has since entered a sharp correction. A “Death Cross” has likely formed on the 4-hour chart, with 20 SMA piercing below the 50 SMA decisively. Price has entered the lower Bollinger Band after breaking the middle line, signally a deeper pullback. Immediate support levels can be found at 28,060 (50% Fibonacci retracement) and then 27,560 (61.8% retracement).