US Dollar May Firm on FOMC, Retail Mania Presents a Short Term Risk

FOMC STICKING TO THE SCRIPT: Aside from the excessive speculative appetite stemming from Reddit traders (WallStreetBets). The main focus will be on the FOMC meeting, however, with little no changes expected on rates and QE, all eyes will be on Fed Chair Powell’s presser. I suspect the Fed Chair will be quick to shut down any talk of the Fed considering tapering asset purchases, therefore, sticking to the current script that the current pace will be maintained for the foreseeable future. This is in line with the majority of the board who have stated that now is not the time to be talking about tapering, which is highlighted in the summary of Fed comments below. That said, an upbeat assessment regarding the second half of the year from the Fed Chair given the vaccine rollout and now a blue wave in Congress could perhaps indirectly fuel tapering expectations for the latter part of the year (Reminder that the IMF upgraded their US growth forecasts yesterday). In turn, US yields will be a closely watched, as a sharp move higher could see the US Dollar firm in the short term, but longer-term weakness is likely to remain. 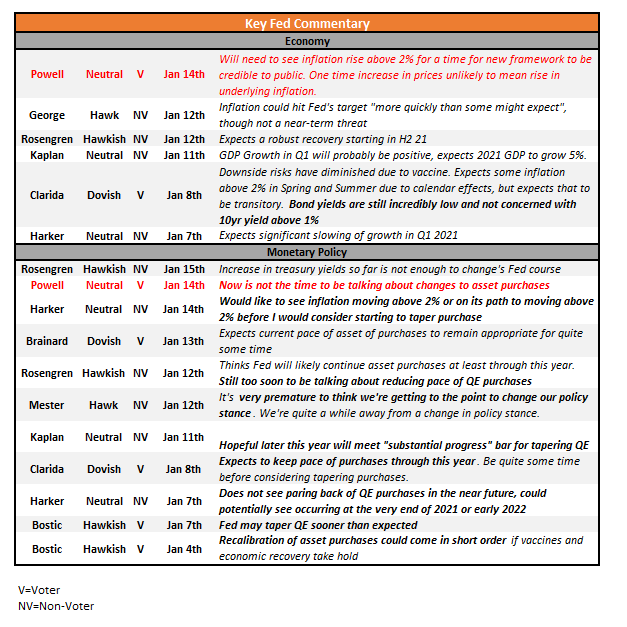 RETAIL MANIA IS A RISK: In recent weeks and particularly this week, market exuberance stemming from the retail side has been garnering attention, raising concerns of elevated bubble risks. The PBoC have also grown concerned over asset bubbles with the central banks advisor stating that bubbles will remain (in the stock or property market) if China does not shift its focus. In turn, the PBoC have drained a net CNY 178bln via open market operations over the past two sessions. That said, the increasing sense of a frothy market is somewhat similar to last June, where the announcement of company bankruptcies resulted in shares soaring, the prime example being Hertz. The graph below shows last years Fed meeting’s (excluding March crisis meetings) and the subsequent price action in the S&P 500. Notably, the post-June meeting saw a sharp 6-7% drawdown. That said, looking across the FX complex, high-beta currencies (AUD, CAD) may be at risk of short-term turnaround with AUD/USD back below 0.77 and USD/CAD testing 1.28.