In response to the coronavirus crisis, which led to a global economic downturn, the Federal Reserve had stepped in with several actions to stem the economic hit from the global pandemic.

Interest Rates: During March in two unscheduled meetings on March 3rd and 15th, the Federal Reserve lowered the Feds Fund Rate by 150bps to 0.00-0.25%, adding that the “rate is expected to remain low until members are confident the economy has weathered recent events and is on track to achieve its maximum employment and price stability goals”.

Federal Reserve Had Slashed Rates to Zero Amid the Coronavirus Crisis 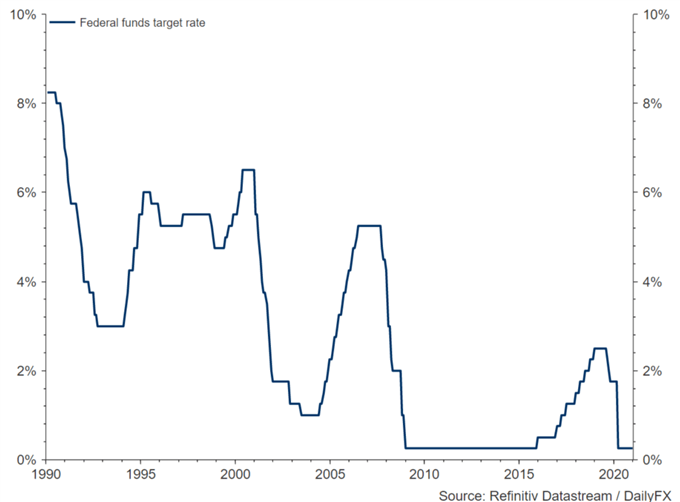 Supporting Market Functioning: On March 15th, the Fed announced it would support market functioning through boosting QE. This involved the central bank buying at least $500bln in treasuries and $200bln in mortgage-backed securities, which was later (March 23rd) made open-ended after stating that they would buy securities in the amounts needed. After the improvement in financial market functioning, the Federal Reserve announced it would purchase at least $80bln/month in treasuries and $40bln/month in MBS.

Alongside this, the Fed announced a range of funding and liquidity facilities, which also supported the smooth functioning of financial markets and the flow of credit in the economy. The full list of facilities announced have been posted by the NY Fed. 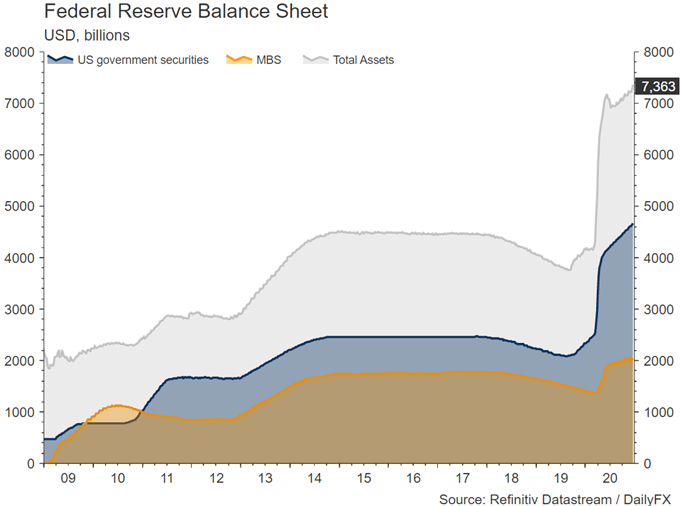 *This shows the Federal Reserve’s asset holdings, which includes US Treasuries and mortgage-backed securities, which have increased significantly since March.

Average Inflation Targeting: Among the more significant changes to the Fed’s policy had been the update to its statement on longer-run goals and monetary policy strategy. On August 27th, Fed Chair Powell announced the Fed’s shift towards average inflation targeting at the Jackson Hole Symposium.

In turn, with this shift in Fed strategy, the view is that Fed rates will remain lower for longer.

The new year will see four regional Fed Presidents rotate into voting spots from January. This will see Fed’s Mester (Hawk),Kashkari (Dove), Kaplan (Neutral) and Harker (Neutral) replaced by Evans (Dovish),Daly (Neutral),Bostic (Dovish), and Barkin (Neutral). However, while this will see slightly more dovish rate-setters, this will unlikely provide a notable shift in the trajectory of current monetary policy. That said, the more dovish members may be more inclined to look through any inflation as transitory and thus remain in favour of very accommodative for the foreseeable future. 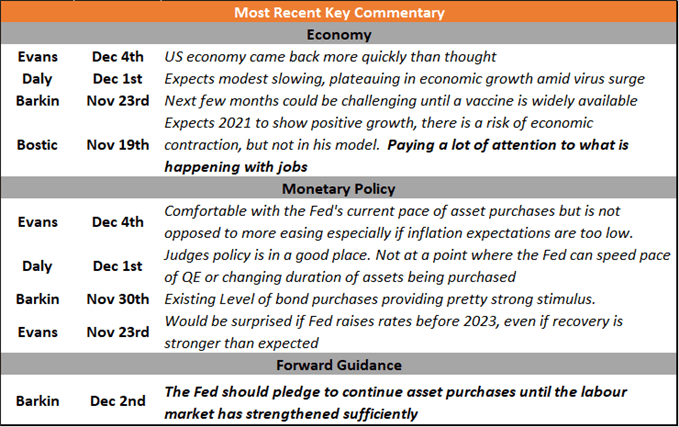 *Meetings that include Staff Economic Projections