Crude oil prices regained some strength on Tuesday as the US Dollar retreated, but overall momentum remains weak from a technical perspective. Traders are eyeing a potentially larger stimulus check amount after the House of Representatives voted to raise pandemic relief payments to $2,000 from $ 600. The proposal is now pending Senate approval.

Stocks across Asia-Pacific markets rallied vividly alongside US equity futures, reflecting optimism about an economic recovery with the help of fiscal stimulus and the vaccine rollout. The prospects for energy demand may be brightened by Covid-relief aid, especially if the Senate approves the House’s proposal for a higher payment amount to individuals

Still, concerns remain over tighter Covid-related travel restrictions around the world, which may serve to limit upside potential for oil. In the near future, uncertainties surrounding the uneven distribution of vaccines, new coronavirus strains and reduced travel activity may post additional uncertainty over the energy demand outlook. The OPEC+ coalition have agreed in early December to increase production by 0.5 million barrels per day starting in January 2021, gradually easing a total production cut of 7.7 million bpd that was carried out earlier this year to shore up oil prices.

Earlier this month, US DOE crude oil inventories have climbed to 503.2 million barrels, reaching a 4-month high (chart below). This was mainly due to a large, 15-million-barrel build in stockpiles in the first week of December. Inventories have seen fallen by 3.13 and 0.56 million barrels in the following two weeks respectively, but the amounts were not substantial enough to boost market confidence. 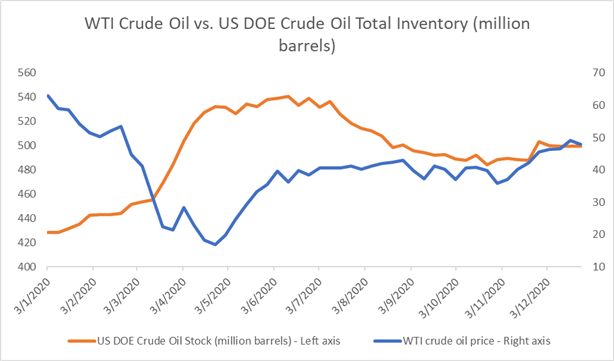 The prospects for a gradual rollout of vaccines and the passing of US stimulus package have fueled a whopping 45% rally in WTI prices from early November through mid-December. For now, prices appear to have entered a period of consolidation, waiting for more concrete evidences to justify the rally. Trading appears to be thin this week due to lack of market participants and poorer liquidity.

A summary of weekly petroleum data released by the EIA last week pointed to a 0.169 million fall in the US crude oil refinery inputs. Refineries are operating at 78% capacity, compared to 79.1% in the week before. Total US commercial crude inventories are about 11% above the five year average for this time of year. Jet fuel product supplied was down 32.9% compared to last year, reflecting a much weaker travel sentiment and demand may take a longer time to revert to the pre-Covid perch.

Traders are anticipating a 1.70-million-barrel decline in US crude inventories for the week ending December 25th, with the actual data coming in on December 30th. Last week, markets saw a 0.56-million-barrel decline in stockpiles, which only marked a small reversion of the 15.20 million barrel increase seen in early December. Oil prices have historically displayed a negative correlation with inventories, with a past-12 month correlation coefficient of -0.358 (chart below). 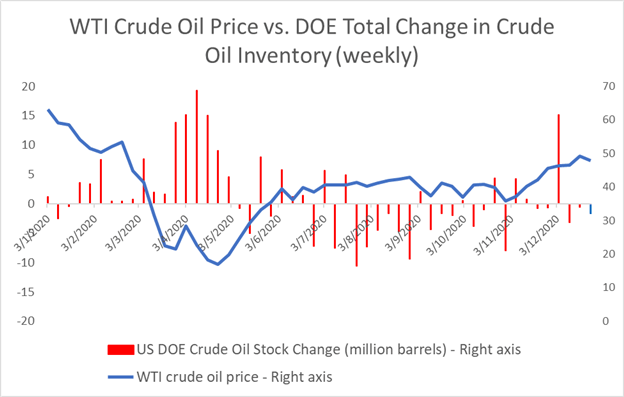 Technically, WTI entered a consolidative period in mid-December and the upward momentum appears to be faltering. An immediate resistance level can be found at US$ 49.40 – a recent high. A failed attempt to breach this level has resulted in a pullback to test its 20-Day SMA line. Breaking below the 20-Day SMA may open the door for further losses, with an eye on US$ 45.80 – the 23.6% Fibonacci retracement.