Bitcoin exploded higher this week with a move over $20,000 on Wednesday with a subsequent break above $23,000 before letting off the gas, or should I say the superluminal propulsion system in this case? The 20,000 mark was a psychologically important one for Bitcoin bulls, which may help explain the speed with which it went on to break above the $21,000, $22,000, and $23,000 levels.

To some, the move higher may cement a growing case for Bitcoin to be included as an asset class among other more traditional investments. For others, the cryptocurrency remains to be seen as a “bubble” that doesn’t warrant the risk given its extreme volatility. Many investing elites are already in the former group, however, with titans like Stanley Druckenmiller, who announced he owns Bitcoin in November.

Bitcoin’s explosion higher this week is nothing less than impressive by any measure or comparison within financial markets, historically speaking. Thursday’s intraday move in Bitcoin held short from crossing the $24,000 level, likely some exhaustion from profit takers following the monstrous rally. Momentum may persist further with the MACD continuing to diverge higher, however.

The 261.8% Fibonacci extension from the most recent major move from the December 1 high to the December 11 low coincided closely with the December 17th high. The preceding day’s price action saw resistance hold very closely to the 161.8% Fib extension. The next rally may see the 361.8% level tested. The usefulness of Fibonacci extensions to help find technical levels as prices venture into the unknown can be handy for these situations and may explain why many Bitcoin traders have an affinity to them.. 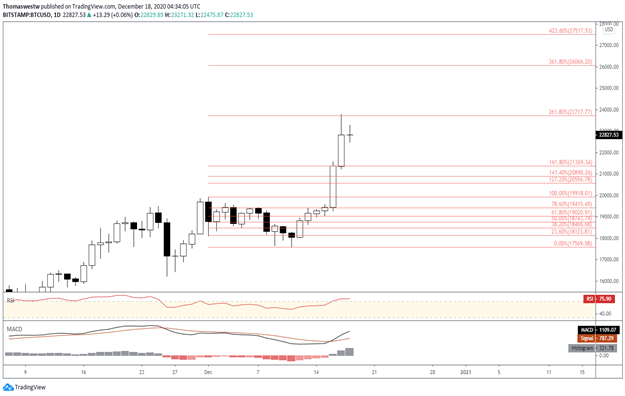 Riding higher on the wave of enthusiasm generated from Bitcoin’s beastly move is Ethereum, among other cryptocurrencies. The technical structure in Ethereum compared to Bitcoin appears similarly bullish with recent price action following a nearly equal tempo and cadence. Overall, the arguably speculative push being generated for cryptocurrencies is appearing to increase correlations between digital currencies, with Bitcoin perhaps being in the driver’s seat.

Homogeneous to Bitcoin’s technicals, Fibonacci levels within Ethereum’s price movement can also be used to find potential resistance points. That said, Thursday’s intraday move was turned back between the 127.2% and 141.4% extension levels. The move may have some gas left in the tank, however, with the MACD continuing to diverge after a recent crossover above the signal line. RSI sits below the 70 overbought level too. 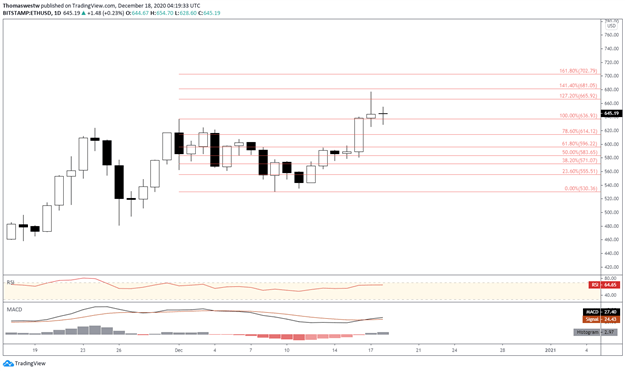