The Japanese Yen (JPY) has remained resilient against the US Dollar despite vaccine optimism. The safe-haven currency may have room to appreciate further against the weakening Dollar but how will this unfold as we enter the December? 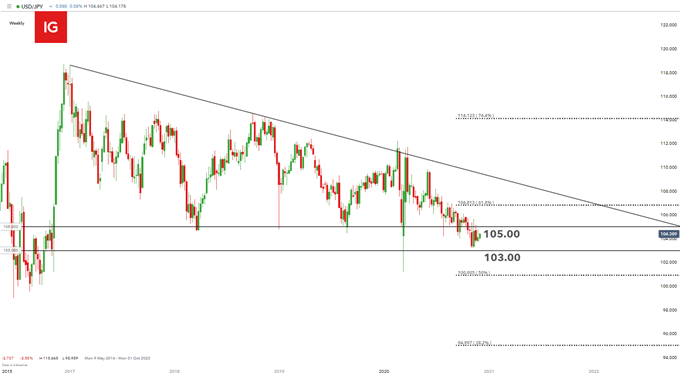 The weekly chart has been fluctuating between the 103.00 – 105.00 region over the past few weeks after bears pushed below the multi-year descending triangle support (105.00). Attempts to stay above the 105.00 level have been unsuccessful evident by the long upper wick candles. This lack of conviction to the upside has rooted the 105.00 level as a strong resistance target.

This longer-term outlook seems to be skewed toward further downside which could target the March low support zone (101.18) which coincides with the 50% Fibonacci level at 100.91. 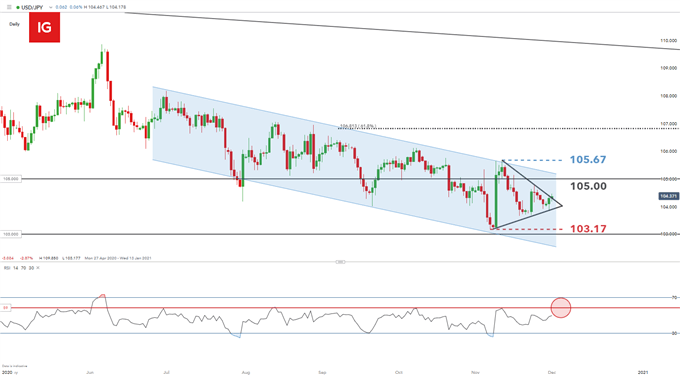 Short-term price action exhibits a strong downward trend within a structured channel (blue). The highs within the channel have established a resistance on the Relative Strength Index (RSI) around the 59 level (red). While this level is still a distance away from topside resistance, it will be interesting to see whether or not price breaks out of the recent symmetrical triangle and move toward the upper end of the channel or will upside momentum fade, showing less conviction from bulls.

A confirmation breakout from the triangle formation to the upside will bring the 105.00 psychological level into consideration after which, the recent swing high 105.67 as extended resistance.

A break to the downside - which corresponds to traditional theory relating to symmetrical triangles. where a breakout in the direction of the preceding trend is favored could see the November low (103.17) as initial support and consequently 103.00 thereafter.

Further your knowledge with other popular continuation patterns include the rising wedge, falling wedge and pennant patterns !

The Yen has weakened against most crosses of recent, but the Dollar has provided a stronghold for Japanese currency. The greenback is facing an uphill battle as many market participants are expecting some Fed intervention in the form of additional Quantitative Easing (QE).

The US Dollar has continued its decline which has outweighed any form of risk-on sentiment from the market. Should the Fed stay away from monetary easing this December, the Dollar could pullback losses against the Yen. Building up to the announcement, there will likely be a sustained downward trend on the pair - ceteris paribus.

All eyes will be on US PMI data today (14:45GMT and 15:00GMT) which is estimated above the 50 benchmark level - meaning that the economy is generally expanding.

This could be positive for the US Dollar as market reaction to figures greater than 50 over the last few months have resulted in Dollar strength against the Yen. This could be a similar result today should data come in as expected or better. Any significant deviation from estimates may lead to large price swings either way.

IGCS shows retail traders are currently net long on USD/JPY, with 66% of traders currently holding long positions (as of this writing). At DailyFX we typically take a contrarian view to crowd sentiment, and the fact traders are net-long is suggestive of a bearish bias on the pair however, due to a higher net change in short positions relative to long positions we revert to a bullish bias.