Gold and silver prices paused gains after a three-day rally, as the US Dollar climbed after the first US presidential election debate. The debate didn’t deliver much of a surprise to the currency market initially, but sentiment quickly turned sour thereafter. The US Dollar, a perceived safe-haven, advanced 0.18% post-debate, sending gold and silver prices down by 0.38% and 1.2% respectively.

As Hong Kong and mainland Chinese markets enter into a long weekend, traders may prioritize risk management and prefer to stay on the sideline. The “Golden Week”, which describes the 8-day Chinese National Day holiday, may see a sharp fall in overseas travelling and spending this year due to the coronavirus pandemic. This may further weigh the demand for jewelry and luxury goods.

Today’s China official manufacturing PMI came in at 51.5, beating the 51.2 forecast. This also marks the highest reading seen in six months. The Caixin version of the Chinese manufacturing PMI figure dropped slightly to 53.0 from 53.1 from a month ago, but remains solidly in expansionary territory. Both figures points to a gradual recovery in domestic factory activities. 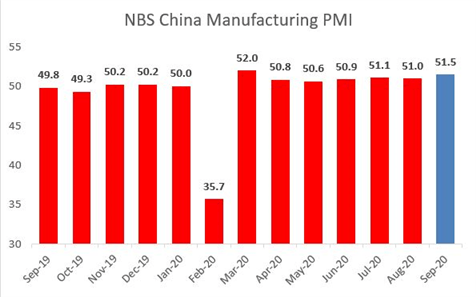 Gold prices have erased some losses this week, after falling as much as 10.5% from their all-time-high of US$ 2,075 seen in early August. In the near term, the outlook of gold largely depends on the direction of the US Dollar, due to their negative correlation and a lack of geopolitical events lately. Similarly, silver has narrowed losses to 20% from its recent peak, trailing behind gold.

From a long-term perspective, however, gold prices appeared to have entered a period of consolidation within a mega bull trend. The macro-environment (ultra-low interest rates, QE and fiscal stimulus) remains accommodative to precious metal prices, albeit a short-term pullback is underway.

Technically, gold prices has rebounded from its 100-day SMA (1,870), eyeing a key resistance at US$ 1,910 – the 61.8% Fibonacci retracement. Gold prices has mostly been trending in the lower Bollinger Band since its trend reversed in early August, suggesting that bearish side might be taking control. A firm breakthrough above its 20-Day SMA is needed to confirm a trend reversal.

IG Client Sentiment indicates that gold traders are heavily leaning towards the long side, with 80% of positions net long, while 20% net short. As gold prices rebounded, retail traders favored short (+14%) exposure rather over long (-1%). Compared to a week ago, however, traders have added both short (+4%) and long (+2%) positions as volatility picked up. 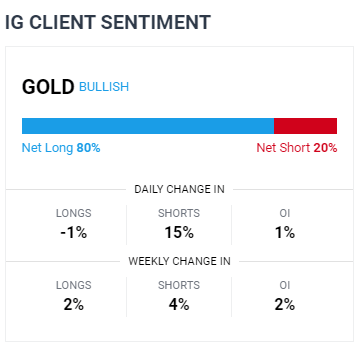 Silver prices have also bounced from the 100-day SMA, eyeing a key resistance level at US$ 24.5. Near-term momentum remains bearish-biased, however, as a “Death Cross” has likely formed by its 20- and 50-Day SMA. Silver prices normally follows gold and may swing in much larger magnitude.