The New Zealand Dollar gained on the RBNZ rate decision, as anticipated in my fundamental forecast. The benchmark lending rate was maintained at 0.25%, as widely anticipated by economists. What seemed to drive the NZD higher instead was most likely an absence of further quantitative easing measures or a hint of urgency in the near term. That likely disappointed expectations, resulting in a less dovish outcome.

The RBNZ did however keep the door open to provide additional stimulus, with tools such as a negative interest rate. In fact, the central bank reported that the banking system is on track to be ready in an environment of negative rates. This makes sense, the RBNZ sees the balance of risks as tilted to the downside. There may be a rise in unemployment and an increase in firm closures.

Additional Commentary from the Reserve Bank of New Zealand

Heading into the RBNZ, overnight index swaps were pricing in about a 75% probability of a 25-basis point rate cut in February. These odds may have been somewhat diminished. Today’s interest rate announcement also follows in the footsteps of the Federal Reserve from last week. There, Chair Jerome Powell seemed to express a lack of urgency to expand its balance sheet, leaving equities vulnerable to disappointment.

Going forward, the sentiment-linked Kiwi Dollar remains under the mercy of general risk appetite. Lately, the faltering on Wall Street has left the currency vulnerable. Investors may be growing increasingly impatient by a lack of urgency from the Federal Reserve to materially boost asset purchases. This is as a second fiscal package remains on the sidelines given ongoing stalemates between members of Congress.

From a technical standpoint, the New Zealand Dollar could be at risk to extending losses. NZD/USD recently closed under a rising trend line from March, confirming the breakout. This followed the emergence of a bearish Shooting Star candlestick formation and negative RSI divergence. The latter showed fading upside momentum. Key support sits below as the 0.6503 – 0.6537 range followed by 0.6381 – 0.6419. 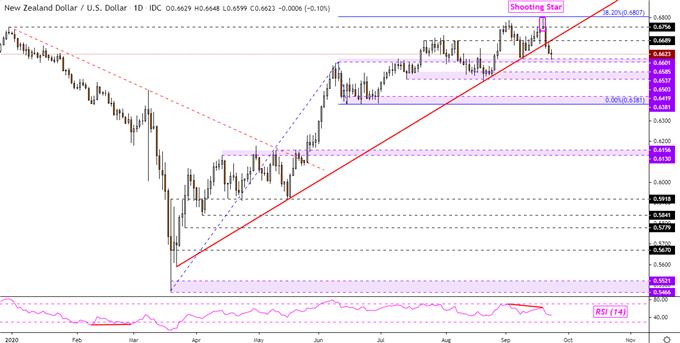