As noted in previous reports, copper’s 56% surge from the March low is showing little signs of abating, after the price of the ductile metal soared to a fresh two-year high (3.0945) at the beginning of the month on the back of rebounding global manufacturing activity and soaring Chinese demand.

However, the reimposition of coronavirus lockdown measures in several European nations and the lack of progress in Congressional stimulus talks may cap the potential upside for the global growth proxy, as British Prime Minister Boris Johnson urges residents to work from home if possible and introduces new restrictions that are likely to last for the next six months.

That being said, copper prices have remained relatively unaffected by the ‘second wave’ of Covid-19 infections and recent resurgence of volatility, with the ductile metal climbing 0.81% in September despite the CBOE Volatility Index (VIX) spiking as much as 53%.

The orange metal’s resilience could be down to its strong positive correlation with 5-year inflation expectations, seemingly established when the Federal Reserve set a 2% inflation rate target in January 2012.

Therefore, with the US central bank adopting a flexible form of average inflation targeting (AIT) and Fed Chair Jerome Powell stating that “well-anchored inflation expectations are critical for giving the Fed the latitude to support employment when necessary”, its rational to expect that copper prices may continue to move higher over the longer-term. 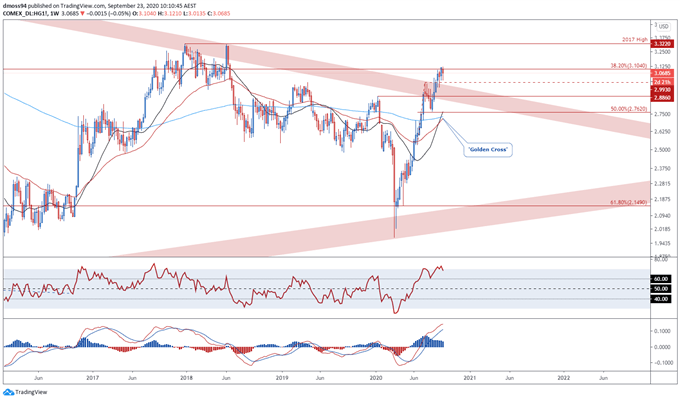 From a technical perspective, copper looks poised to extend its climb from the doldrums of March, after bursting through Symmetrical Triangle resistance and registering overbought readings on the RSI for the first time since September 2017.

Moreover, the MACD indicators surge to its highest levels since 2017, combined with a moving average ‘golden cross’ formation, hints at building bullish momentum and could encourage would-be buyers if price remains constructively perched above the January high (2.9930).

Conversely, a break below psychological support at the 3.000 mark could inspire a more sustained pullback and bring the 50% Fibonacci (2.7620) into focus.

However, zooming into a daily timeframe suggests that a reversal lower could be in the offing, as price carves out a bearish Rising Wedge pattern and fails to close above the psychologically imposing 3.10 level.

That being said, with copper prices continuing to track above the 21-, 50- and 200-day moving averages, the path of least resistance seems skewed to the topside.

With that in mind, a push to fresh yearly highs could eventuate in the coming weeks if support at the July high (2.9930) remains intact, with a daily close above the 38.2% Fibonacci (3.1040) probably signalling the resumption of the primary uptrend.

On the other hand, a daily close below the 3.000 mark may validate the downside break of the Rising Wedge pattern and potentially inspire a pullback towards the sentiment-defining 200-DMA (2.7245)