Australian Dollar traders will keep a close eye on China Balance of Trade data for clues about the demand for goods from the world’s second-largest economy. The data will likely have an impact on the Australian Dollar, which has exhibited a historic sensitivity to Chinese data due to the economic link between the two countries.

Market forecasts flag a 7.5% rise in exports and a 0.2% increase in imports from a year ago. A better-than-expected reading will likely boost the commodity-linked currency, whereas disappointing figures will likely do the reverse.

As the US markets are shut for the Labor Day holiday, Asia Pacific currencies may experience thinner liquidity than usual, which renders them particularly vulnerable to data surprises and overall event risk. Market volatilityand movements may be exacerbated due to a lack of participants. 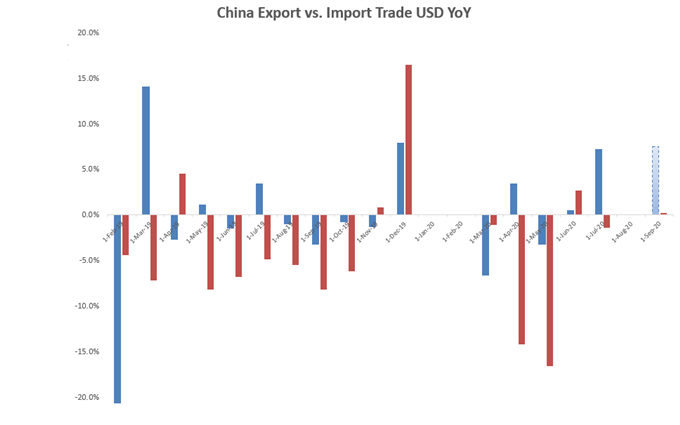 Technically,the AUD/USD has retraced back to its 20-Day Simple Moving Average (SMA) line after hitting the upper bound of its Bollinger Band last week. The 20-Day SMA, which is now at 0.7253, may serve as an immediate support level for now. The overall trend remains bullish as suggested by the other two SMAs – the 50-Day and 100-Day. A strong resistance level can be observed at 0.7390 – the 200% Fibonacci extension level. It may require a strong positive catalyst and upward momentum to break above it.

Australia’s ASX 200 index is set to open mildly lower following last Friday’s 3% decline. US stock futures are falling in early Asia hours and thus may weigh on the broader sentiment. Nonetheless, the release of Chinese trade figures may help to paint clearer picture for the rest of the day.

Technically, the ASX 200 index has found an immediate support level at 5,820 - having it tested twice last week. However, the index has likely broken an “Ascending Triangle” last week and thus has opened further downside towards the next key support level at 5,770 – the 23.6% Fibonacci retracement. The MACD indicator has turned sharply lower, suggesting that sellers are in control.

Hong Kong’s Hang Seng Index (HSI) may attempt to find some support at around 24,500 after two bloodbath trading sessions last week. Alibaba (9988 HK) and Xiaomi (1810 HK) are added into HSI with effect from 9th Sep. This will significantly increase the 'tech' weight of the stock benchmark.

Technically, the Hang Seng Index has likely broken an “Ascending Triangle” formed since early August. The MACD indicator has turned firmly bearish. Despite that, HSI may consolidate at around 24,500 first before finding a clear direction. How US stock markets behave this week will have a significant impact on Asian stock indices.