The Bank of England is due to release its economic projections for the first time since the coronavirus crisis. While growth projections may be revised higher given the very negative illustrative scenario that the BoE had provided in the May report. Much of the focus will be on the signals relating to the future path of monetary policy. Therefore, all eyes will be on commentary towards negative interest rates or perhaps a signal as to where the lower bound is. As it stands, OIS markets are not pricing in negative rates until May 2021. That said, the BoE will likely maintain a “wait and see” approach for now. Keep in mind, there are greater risks on the horizon with EU-UK trade talks reaching its climax in Q4, alongside the furlough scheme scheduled to expire at the end of October.

Markets will have a first look at the UK Q2 GDP report, which is seen contracting around 25%. However, as BoE rate setter Tenreyro highlights, there is no need to read too much into the precise figure, particularly with focus on the shape of the recovery and not the depths of the crash.

The Federal Reserve provided little in the way of new information at its last meeting, the main takeaway being that Chair Powell acknowledged that high-frequency data showed signs that the economy had stalled since mid-June. That said, with the Jackson Hole Symposium scheduled for the end of August, the focus will be on whether the Fed provide a teaser as to the results of their strategy review to lay the foundations for the September meeting. The review will look at potentially enhancing forward guidance (i.e. Average Inflation Targeting). Recent commentary from the likes of Fed’s Brainard has suggested that the thinking among committee members is that they want to run the economy hot and thus potentially allow for an overshoot in inflation.

Perhaps the most discussed economic indicator at this point is whether the unprecedented stimulus on both the monetary and fiscal front will lead to inflation or not. The precipitous drop in US real yields as inflation expectations pick up has pushed gold (typically an inflation hedge) to fresh record highs. In turn, with economists divided as to whether this stimulus will lead to inflation or follow a similar pattern that was seen after the global financial crisis (long gold vs long bonds), US CPI will be high of importance in the months ahead.

After back to back record jobs gains, the Non-Farms Payrolls report is expected to show a slight moderation to 1.6mln (Prev. 4.6mln). However, we pay closer attention to the more timely jobless claims data, which has begun to rise in recent weeks, signalling a slowdown in the jobs market as several US states halt re-opening plans and look to reimpose restrictive measures amid the resurgence of COVID cases in the US.

NFP and Forex: What is NFP and How to Trade It?

The RBNZ monetary policy decision is likely to be the main mover for NZD. As a reminder, at the prior meeting, the RBNZ stated that “the appreciation in the NZD has placed further pressure on export earnings”. As such, with the central bank flagging their concerns over NZD strength, this raises the likelihood that the central bank will take measures to address this. With regard to negative rates, this would be too soon as the RBNZ have asked banks to be prepared by the end of the year. LSAPs are the first call to action (currently stands at NZD 60bln and is due to run out by May 2021). The main risk to NZD would be the introduction of foreign asset purchases, which is a more direct tool for FX intervention. 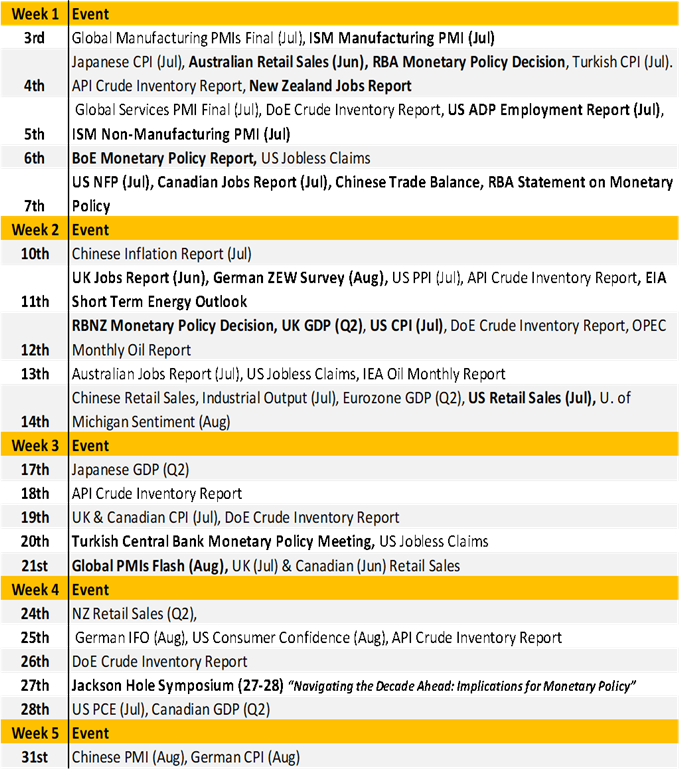