US Dollar Drops to Huge Level: Risk of Breakdown if Support Fails

US Dollar Getting Left Behind in Global Recovery

The drop in the US Dollar has been somewhat relentless in recent weeks, with the DXY failing to put up a fight against to curb the selling. Among the key factors behind this has been the continued improvement in market conditions, which in turn has seen equity markets pushing higher. As such, investors have sought out assets denominated in foreign currencies as optimism increases over a potential recovery thus weighing on the greenback amid its strong negative correlation to risk assets.

Strong Negative Correlation Between US Dollar and Risk Assets 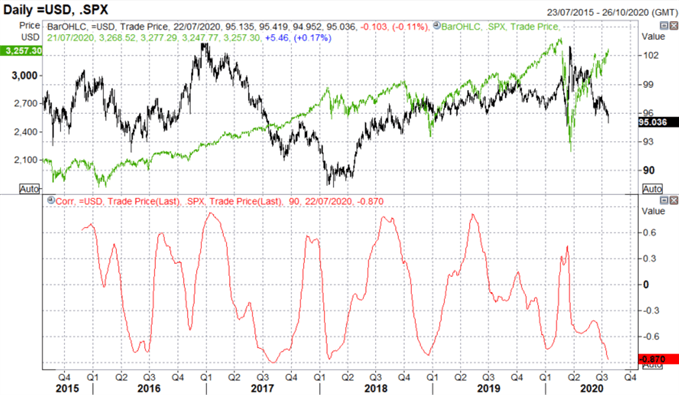 EU Deal is a Game Changer for the Euro

Elsewhere, a topic we have mentioned previously has been on the precipitous drop in US real yields, falling deeper into negative territory and further eroding support for the greenback and instead benefiting precious metals. Alongside this, the EU’s historic deal on joint fiscal action has been a game-changer for the Euro, making Euro-denominated assets a more attractive place for investors. 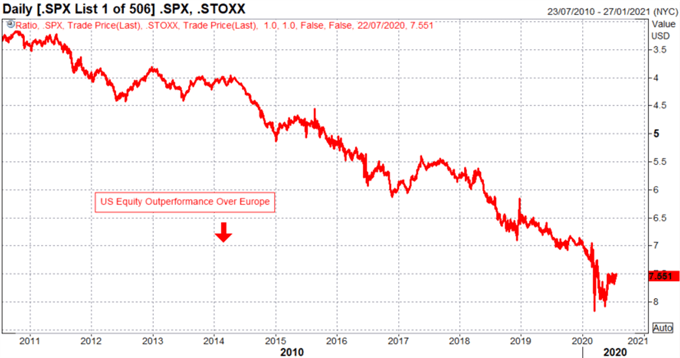 Weaker US Dollar is the Path of Least Resistance

The greenback is now hovering around pivotal support at the 95.00 handle. The level has generally held steady over the past 18-months, a firm break below paves the way for further losses towards 92-93. While the path of least resistance is most definitely lower, there is a concern of chasing the greenback lower, given that short USD bet is very much a crowded trade and thus is vulnerable to a possible snapback. That said, the longer optimism remains rife in financial markets, the longer the dollar remains under pressure.