The Hang Seng Index surrendered its recent bullish energy on Thursday, dropping over 2%, as waning global risk appetite dragged on global equities. Before Thursday’s drop, bulls appeared to be making ground upwards into highs not seen since March with the Hang Seng appearing set to overcome COVID-19 worries, mass protests, and political tensions between the United States and China. However, market participants may have been premature in pricing in the “V-shaped” global recovery which likely contributed much of the fuel driving the index higher, despite the previously mentioned headwinds for the index. 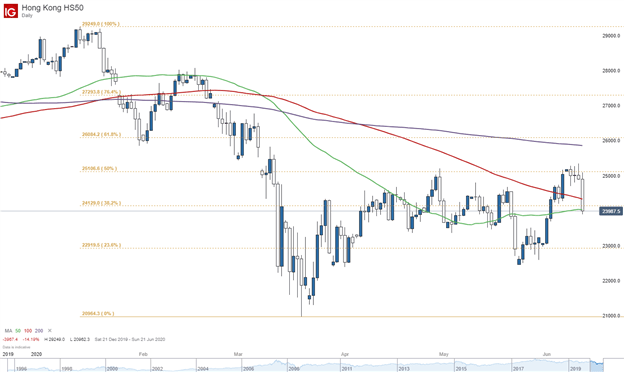 While many of the current global drivers are forefront for Hang Seng price action, political stability between Hong Kong and China, and to a larger extent, the United States and China remain in the spotlight. For now, protests in the city seem to be taking a step back in intensity, but remain, nonetheless. Granted that, economic uncertainty regarding policy continues to shift higher, globally and in Hong Kong, as displayed in the chart below. 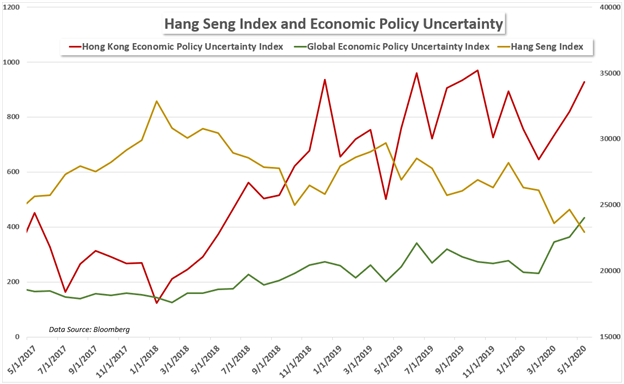 The more condemning factor for bulls going forward, perhaps turns to US measures in response to China’s alleged overreach into Hong Kong’s affairs. Recent action from the United States regarding Hong Kong’s special trade status in late May failed to trigger meaningful selling in the index. However, as global risk appetite pulls back, the exuberance allowing bulls to ignore the clear headwinds may recede completely and allow a more appropriate, or at least more conventional, repricing in the index.

Still, fundamentally speaking, market participants have much to mull over in the coming weeks and months. Hopes for a “V-shaped” recovery may overtake once more and allow the current drop in market pricing to be marked as a hiccup on the way to higher ground. Should risk appetite return however, would it afford bulls enough conviction to aim for new highs on the Hang Seng, and at the same time overcome the more direct influence of political pressure between Hong Kong, China, and the United States? For now, the picture is still parlous, and traders may be wise to sit on the sidelines until a decisive direction takes hold.