The Canadian Dollar is crumbling in response to the latest BOC decision that just crossed the wires. The Bank of Canada, championed by Governor Stephen Poloz, announced that the central bank cut its benchmark interest rate by 0.5% from the previous 1.75% level.

This was the first time that the BOC cut rates since July 2015 and first 50-bps cut since March 2009. According to the press release accompanying this morning’s interest rate decision, the Bank of Canada acknowledged that “the first quarter of 2020 will be weaker than originally expected.”

The BOC also noted how the recent drag on economic activity across Canada – largely due to the novel coronavirus outbreak and widespread railroad traffic disruptions – could weigh on BOC outlook further if sustained. 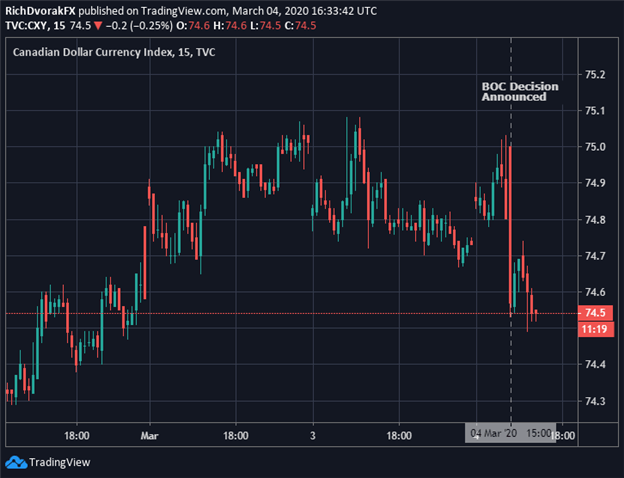 The move was largely expected by traders, however, considering that overnight swaps priced in 43-bps of easing prior to this morning’s rate decision from the BOC.

Nevertheless, the Canadian Dollar Currency Index (CXY) took a sharp drop immediately after the Bank of Canada announced that it cut rates by 50-bps, which was more than the median economist estimate calling for a less-aggressive 0.25% cut.

This is seeing that the BOC decision today opens up the door to more interest rate cuts down the road, which is in consideration of the latest forward guidance provided by the Bank of Canada.

Specifically, Stephen Poloz and the BOC Governing Council noted in this morning’s press release that the central bank “stands ready to adjust monetary policy further if required to support economic growth and keep inflation on target.” 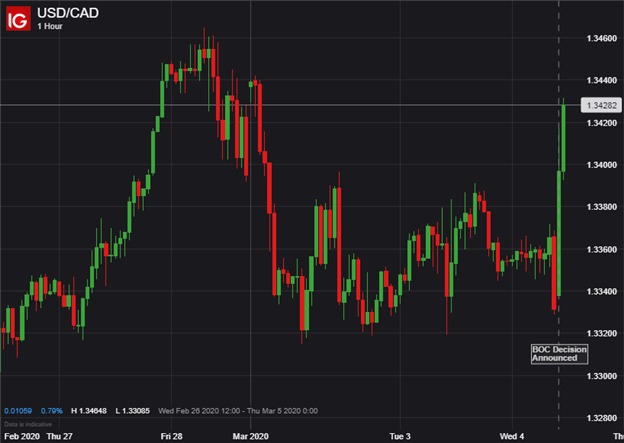 USD/CAD price action spiked higher into the 1.3400 handle following the BOC rate cut. The Canadian Dollar might falter further against its US Dollar counterpart with spot USD/CAD showing potential of testing year-to-date highs around the 1.3460 mark.

Another possible level of technical resistance could be around the 1.3439 price. This area is the upper barrier of the options-implied trading range for USD/CAD derived from overnight options contracts, which was outlined in this US Dollar forecast published yesterday. 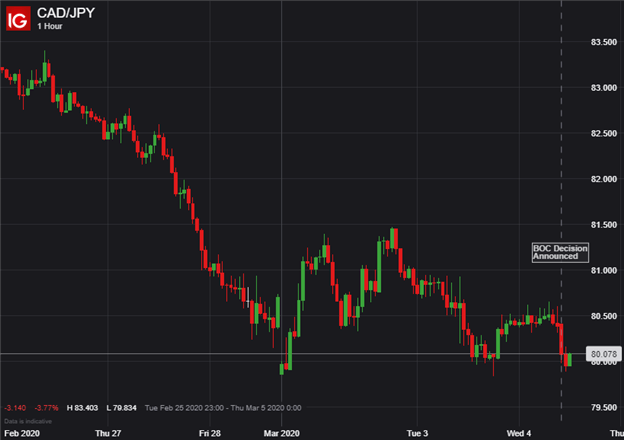 Spot CAD/JPY took a 40-pip spill down to the 80.000 level immediately after the BOC interest rate decision, which completely erased gains notched earlier during Wednesday’s trading session. Likewise, the Canadian Dollar is now lower on the day relative to most other major currency pairs.

As such, spot CAD/JPY might look toward the October 03 and August 25 intraday swing lows printed last year, likely driven by a bogged down Canadian Dollar and inflated BOC rate cut bets, if Loonie bears can breach the 80.000 price level.