The Australian Dollar took the worst snapshot of China’s private manufacturing sector on record in its stride Monday. That was not because there was anything good about the data, but because official figures released over the weekend had already prepared the market for awful news.

February’s Purchasing Managers Index from media group Caixin came in at 40.3. That was the lowest since this series began in 2004 and even weaker than the 40.9 recorded in November 2008 when financial crisis raged. It was well below Januarys’ 51.1 and market expectations which looked for a 45.7 print.

This was yet another stark indication that the coronavirus is ravaging China’s economy and of all the risks that poses to global growth. Caixin recorded record fall in output, new orders and employment, with travel restrictions cutting supply chains. The only bright spot was the business confidence rose, as companies hoped for a recovery of which there is no sign yet.

In the logic of PMI data the 50 level separates expansion from contraction. Thanks to Australia’s famed taw material export links with the world’s second largest economy, the Australian Dollar is often the markets’ favorite liquid China proxy bet, but it held up this time because the official PMIs released at the weekend were even worse. 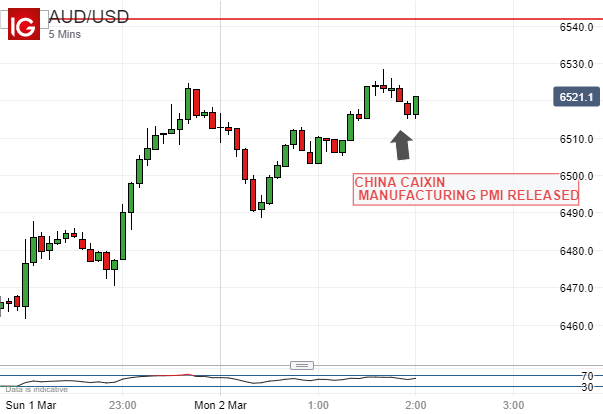 That manufacturing gauge chalked up a worst-ever 35.7, with the non-manufacturing print stricken too at 29.6. Australia’s close economic links to China have already seen the currency take a huge, virus-related hit this year, with AUD/USD sinking down to eleven year lows. 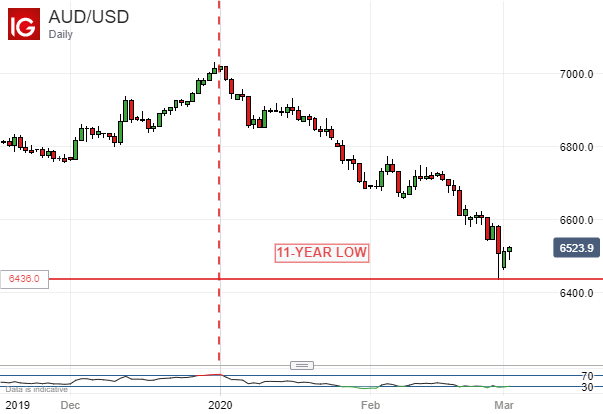 Much focus now turns to the Reserve Bank of Australia’s March monetary policy decision which is due on Tuesday. Market pricing strongly suggests that the record low 0.75% Official Cash Rate will be staying put for another month, with that possibility priced at more than 80% by futures markets.

However, some bookmakers have reportedly started to offer a quarter-point reduction as the favoured outcome in the last twenty-four hours, notably after the official China PMI data were published.

In any event the RBA is looked on as one of the few developed market central banks with scope to reduce borrowing costs further, and the markets believe that it will do so at least once this year and possibly twice.

Before the coronavirus hit, the market judged the path lower to be one the RBA would only take in extremis, and possibly with reluctance, not wanting to stoke Australia’s already massive private debt. The coronavirus story has seen that path cleared somewhat in market minds, and it’s unlikely that the Aussie can expect a lot of monetary support this year.