The Swiss Franc made gains Thursday suggesting that US President Donald Trump’s speech on his administration’s coronavirus response did not reassure nervy financial markets.

Other counter-cyclical ‘haven’ assets like the Swiss Franc and gold also saw modest rises in the aftermath, while US stock futures slipped, by as much as 1% while he was speaking in the case of the S&P 500 which has already endured five straight days of losses.

The President attempted to reassure both markets and the public. He pointed to the relatively low level of cases reported in the US and focused on the need for basic hygiene measures to combat the contagion, while public health officials noted that attempts to produce a vaccine against coronavirus were ongoing.

However, the markets are increasingly worried about the global economic hit that the disease could bring, and just before Trump spoke US news outlets reported that a person had been infected by unknown means in California. Most cases can be traced back to contact with people from the virus’ starting point in China but those with no known link complicate the fight against it. Norway also announced its first confirmed case in the hours before the speech.

Various countries from China through Singapore and beyond have seen growth forecasts revised lower with the outbreak repeatedly cited.

The contagion has seen investors move back into the usual run of assets which tend to do well when growth fears predominate. The Swiss Franc is of course one but the US Dollar itself along with the Japanese Yen, bonds and gold have all seen broad support. Ten-year US Treasury yields have made record lows, as they move inversely with prices, and Goldman Sachs has this week upped its twelve-month gold forecast to $1800 from $1600. 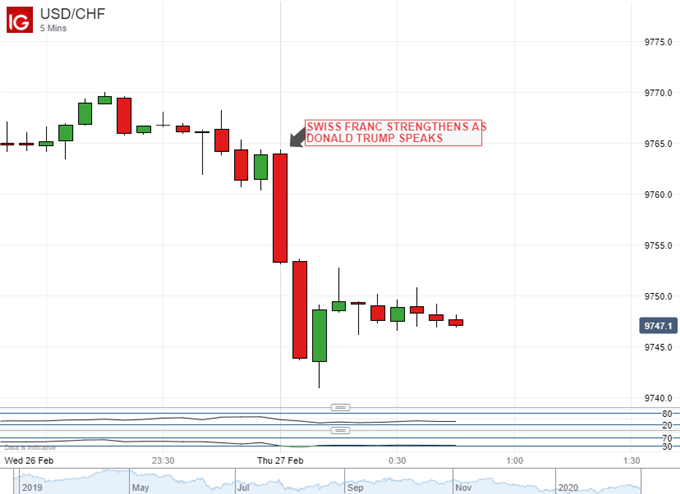 The Swiss currency rose in the wake of the speech, with USD/CHF continuing to track lower as it has for most of the time since December.

The strong underlying bid for all assets in this class is likely to remain in place for as long as coronavirus and its spread continue to dominate the headlines.