December’s Purchasing Managers Index from media firm Caixin came in at 51.5. That was just below the 51.6 forecast on average by economists and October’s 51.8. However it was still nicely above the 50 mark which separates expansion from contraction.

Taken in conjunction with this week’s official series, which covers large, state-linked entities, the numbers underline the narrative already prevalent in the markets, that China continues to expand but at a greatly reduced pace. The Caixin measure has been rising since June and this latest data may suggest a leveling off.

One of global markets’ most pressing concerns as a new year gets going is the extent to which some trade rapprochement with the United States can spur a revival. The People’s Bank of China cut banks’ reserve requirements on Wednesday. This is the latest in a series of stimulus measures and investors will of course be keen to gauge their effectiveness.

The Australian Dollar can be the foreign exchange market’s favorite liquid China proxy but was not obviously so on Thursday. Despite the reopening of many regional markets, the position of the Christmas and New Year breaks this year means that trade proper may well not revive until Monday 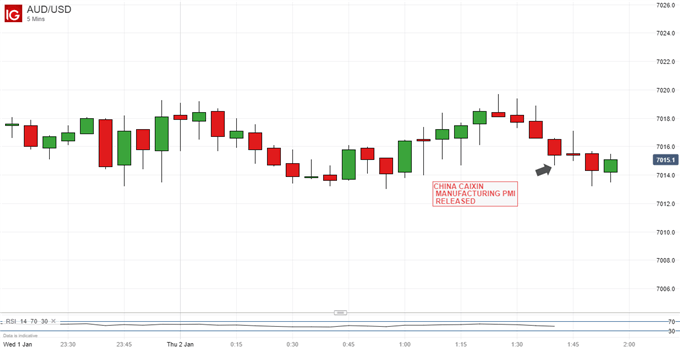 That revival l has many roots, the most important probably the prospect of that interim trade deal. The election of a strong, pro-Brexit majority government in the UK has also helped. While uncertainties still abound, at least the direction of travel has been agreed. The Australian Dollar has been quite sensitive to Brexit-related risk appetite. 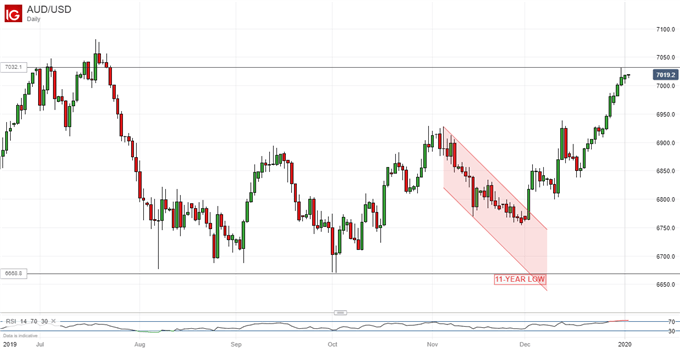 AUD/USD is back up to highs not seen since July and, not surprisingly given the speed of its rise, looks dramatically overbought. Domestically the chances of lower interest rates are judged by futures markets to have dwindled somewhat, although, if inflation fails to pick up, it remains hard to see how at least one more cut will be avoided. The Reserve Bank of Australia may also worry about the Aussie’s ascent. A strong currency hobbles imported inflation, making stickily below-target price rises even stickier. The central bank is unlikely to fight the market, but its early year commentary on the Aussie’s level will be fascinating.