Australian Dollar Up as China Manufacturing PMI Hangs On Above 50

The Australian Dollar didn’t move much in session clearly thinned by the holidays on news that China’s manufacturing sector managed to stay in expansion territory this month.

Its official Purchasing Managers Index was 50.2, a tick above the 50.1 level markets expected and exactly the same as November’s print. In the logic of PMIs and reading above 50 signifies an expansion for the sector. The latest edition will offer modest relief that the return to positive territory which started last month goes on, even if it remains very tentative.

The PMI was below 50 for eight of 2019’s twelve months as trade war tensions, worries about a more general economic slowdown and political unrest in Hong Kong roiled the Chinese economy.

The service sector reading was 53.5, much more clearly positive but still a deceleration from November’s 54.4, for a composite of 53.4.

All up the data still speak to significant underperformance in the Chinese economy and will do little to alter perceptions that a trade settlement with the US can’t come too soon.

The Australian Dollar can act as the markets’ favorite liquid China bet, thanks to Australia’s huge export links with the world’s number two economy. However, on a New Year’s Eve morning there seemed little appetite to chase AUDUSD higher on these figures. 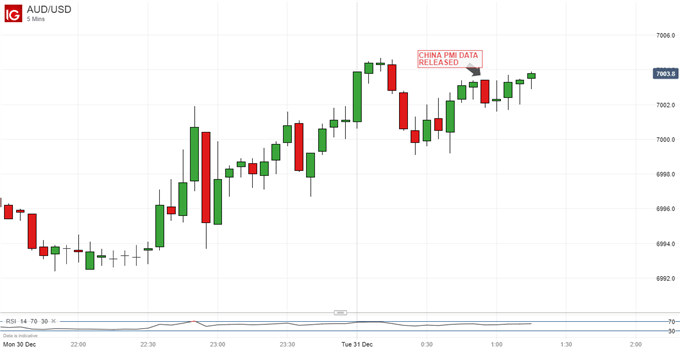 The Australian Dollar has had a great run higher since the lows of early December and is now back to highs not seen since July against its US big brother. The Aussie remains one of the pre-eminent global growth-play currencies and has therefore done well as investors have started to feel more confident and pushed US stick indexes up to new record highs. 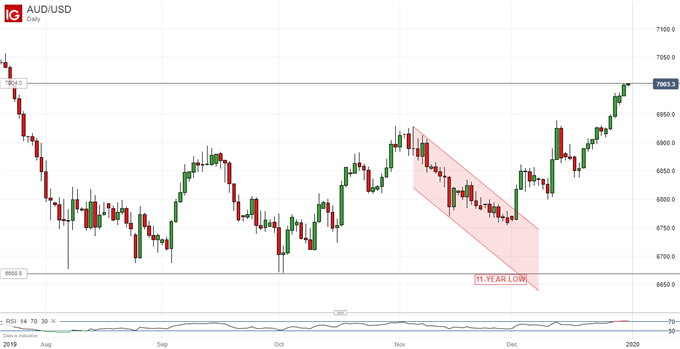 AUD/USD has also been supported by hopes for better trade relations between the US and China, and also by the election of a strong majority government in the UK which ended the torturous Brexit deadlock in Parliament. The Australian Dollar has been one of the currencies most sensitive to the Brexit story and its effects on risk appetite.

Domestically job-creation has remained strong and, while the markets would not be surprised to see record-low Australian interest rates fall again in 2020, the probability of such a move has been judged to have lessened a bit this month.

Official inflation figures may well be key here, with consumer price growth stubbornly below the Reserve Bank of Australia’s 2% lower target band all year. A stronger Australian Dollar makes that target even harder to hit, so RBA commentary on the currency as the new year gets under way will be fascinating.