The Australian Dollar dipped Tuesday following the release of minutes from the last monetary policy meeting of the Reserve Bank of Australia which struck a quite downbeat note.

The meeting itself saw the key Official Cash Rate left on hold at its 0.75% record low, with the minutes saying that the central bank would now monitor the economics and reassess if necessary in February. It stuck to old messages of reassurance that more stimulus could be added if needed. Markets think it will be, with interest rates expected to fall again in the new year. Some economists prepared to bet on Quantitative Easing- so far untried in Australia.

However, the minutes also said that it would be ‘concerning’ if the outlook for jobs deteriorated, putting extra impetus on Thursday’s official data on this subject. October was a rare weak month for Australian job creation. November may better it, but investors may be keen to see that it does before committing themselves.

The RBA remains concerned that wage growth is not strong enough for inflation goals to be met, but that a gradual recovery in house prices could help consumers feel more upbeat.

All up this was a fairly steady snapshot of RBA opinion, with the concession that global risks may have receded balanced by worries about the domestic picture. Still, AUD/USD retreated in the aftermath. The markets foresee easier policy ahead and this report changed no minds. 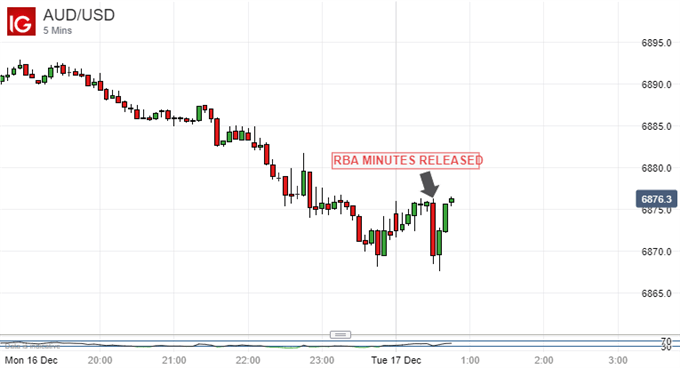 On its daily chart, AUD/USD remains capped by the one-month peaks of December 13. The currency benefited from a surge in global risk appetite following last week’s news that the US and China were ready for a ‘phase one’ trade deal. Sentiment has wilted a little since, however as the markets remain short of detail on this subject or the chances of a more substantive, phase two agreement. 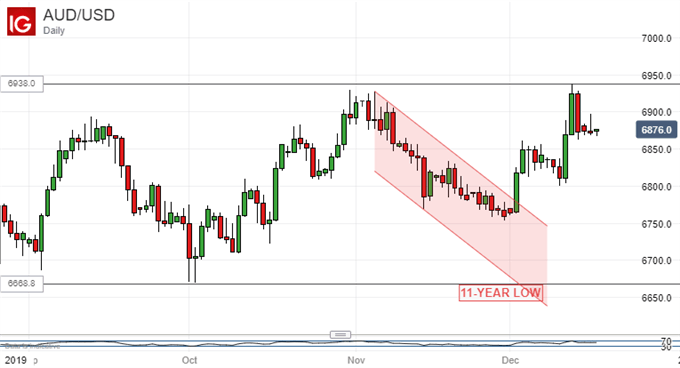 The currency also benefited from the conclusive result of the UK’s ‘Brexit’ election but its own lack of monetary policy support is likely to continue to weigh.