Crude oil prices retreated Monday from the near three-month highs seen last week. Markets continued to applaud the prospect of a phase one trade deal between China and the US while realizing that the still elusive phase two accord will be where the real action is. Lack of detail

Growth sensitive markets such as oil made gains last week on news of both the interim deal and the victory of the Conservative Party in the United Kingdom’s crucial general election. However, oil prices inched back down again as the magnitude of work still to do between the world’s two largest national economies became apparent, with agreement so far really amounting to little more than a formalized tariff truce.

There was better economic news out of China Monday, with both retail sales and industrial production beating market forecasts suggesting that, at very least, Beijing’s stimulus measures may be paying off. However, energy markets continued to slip as trade details continued to dominate sentiment.

US crude’s weekly chart shows the uptrend from late September still very much in process. 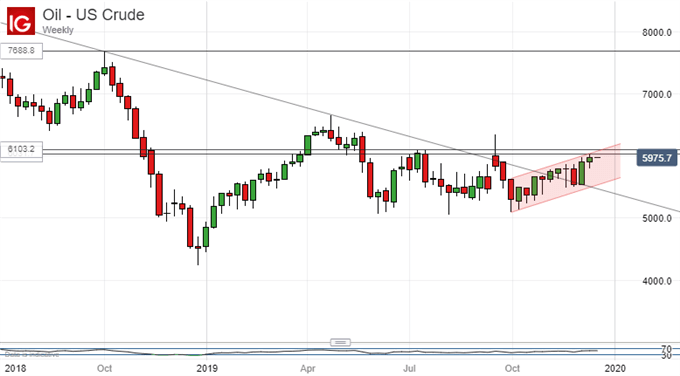 However, the rally seems now to be capped by resistance from July 1’s highs at $61.12/barrel. This point bars the way to the year’s peaks in the $66 area. It’s notable, however that the downtrend line from October 2018’s five-year peaks has broken to the upside. Further gains look likely but, as the next couple of days are short of heavyweight economic numbers, trade headlines are likely to drive this market.

Gold prices gained some support as Asia-Pacific investors fretted the lack of trade-deal details to date. Haven assets had struggled last week as both the trade and Brexit stories revived risk appetite sharply. 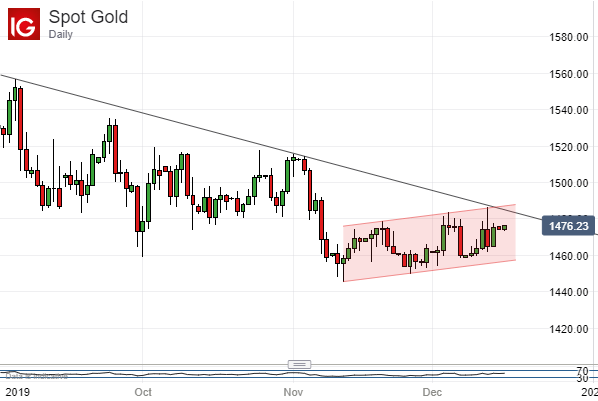 The daily chart uptrend from November’s lows remains very much in play although the longer-term downtrend line from this year’s September peak still looks like a cap on this market.

The rest of the global session offers a raft of closely-watched Purchasing Managers Index figures from Europe and the US. These may offer the markets some temporary directional clues.