The UK Conservative party are heavily odds-on to gain a majority at next week’s General Election with one bookmaker – Paddy Power - shortening the odds to 4/11 from 4/9 on favorable opinion polls. The same bookmaker has no overall majority priced at 2/1 while Boris Johnson is 1/5 to be Prime Minster after the GE with Labour leader Jeremy Corbyn at 3/1. While General Election’s can be fickle – Theresa May lost a lot of support in the final week before the 2017 election leaving her running a minority government – the numbers and the market’s subsequent reaction point to Boris Johnson winning a working majority in Parliament, and an end to the Brexit deadlock. If however history repeats itself and the Conservatives are unable to gain a majority, Sterling-crosses will remain at risk of a sharp sell-off.

While FX market headlines will point to GBP/USD appreciation, a better proxy for the GE and Brexit is EUR/GBP. The market rally between early-May and mid-August this year was fueled by increasing fears around Brexit negotiations and the overall financial market unease with the UK. The pair made a fresh nine-month low today (0.84820) and currently trade a fraction away from the March 13 low print at 0.84725. The next level of support after here is the mid-April 2017 low at 0.83133 before the April 2016 swing-high at 0.81175. The CCI indicator shows the market in oversold territory but any rally should run into resistance between 0.8550, the 20-dma, and 0.86065, the November 20 high. 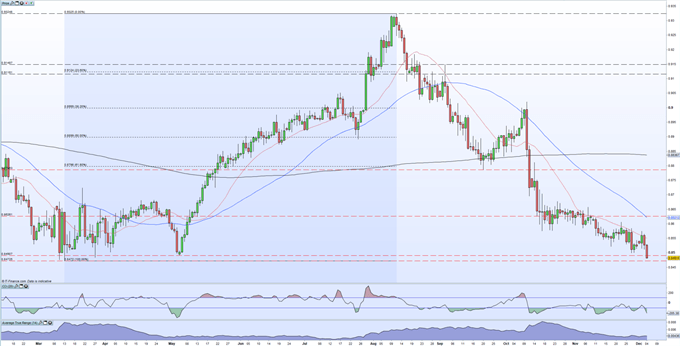 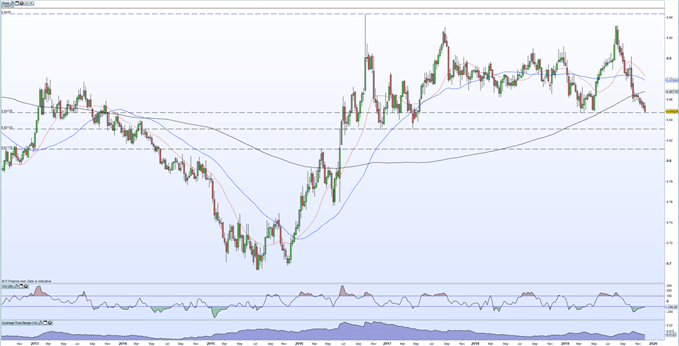 IG Client Sentiment shows that traders are 75% net-long EUR/GBP, normally a bearish contrarian bias. However, recent daily and weekly sentiment shifts give us a mixed outlook.

What is your view on the Euro and Sterling – bullish or bearish?? You can let us know via the form at the end of this piece or you can contact the author at nicholas.cawley@ig.com or via Twitter @nickcawley1.