Factory activity shrank for a sixth straight month in October, while service sector activity was at its slowest since February 2016. However, while this was not obviously news to cheer oil-market bulls, the prospect of China adding to economic stimulus in the wake of this latest gloomy data reportedly did energy prices some good.

Commentary from the ‘plenum’ meeting of China’s ruling Communist Party may offer some clues as to how the world’s second largest national economy plans to deal with the obvious chilling of its economic conditions.

Overall risk appetite was also lifted by the US Federal Reserve. It cut interest rates as expected which supported growth-sensitive assets despite the accompanying suggestion that monetary easing could now pause.

Gold Inches Up Despite Fed Largesse

Gold prices managed gains as the US Dollar slid quite broadly after the Fed. This market might have been expected to take a bit of fright at the prospect of a pause in interest rate cuts. After, lower rates and bond yields improve non-yielding gold’s attraction relative to bonds.

That it didn’t may suggest that investors aren’t entirely convinced that the Fed will indeed be able to pause for long before cutting again and pretty sure in any case that it will some time before rises are even contemplated.

The markets will now look to Eurozone growth numbers and personal consumption and expenditure figures out of the US for their next directional cues.

US crude’s foray above October 11’s high of $55.00/barrel looks to be under greater threat now as the market gets closer to that important psychological support point which it spent most of this month below in any case. 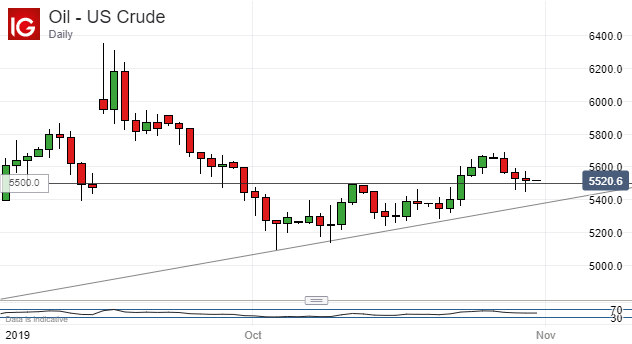 The modest uptrend from this month’s lows looks safe enough for the moment given the relatively small size of daily trading ranges. It doesn’t come in until $53.61.

As October bows out it can be seen that it was quite a strong month for gold, even if the bulls didn’t manage to top September’s highs on the monthly chart.

The on-month rises seen since July are starting to look as though they might represent a degree of over-extension. Support around $1366/oz is formed by various monthly tops dating back to early 2016 and looks to waiting should September indeed prove to be the near-term peak.