GBP/USD eclipsed the 1.3000 price level momentarily this morning as the fading risk of no-deal Brexit continues to bolster the cable. Similarly, gains in the British Pound has pushed spot EUR/GBP prices back below the 0.8600 handle. The most recent extension to the Sterling’s sustained advance likely comes despite ongoing Brexit confusion following this weekend’s canceled vote on the latest Brexit Withdrawal Agreement, which forced PM Boris Johnson to formally request an extension to the October 31 Brexit deadline.

Paralleling when the House of Commons was gridlocked over prior UK Prime Minister Theresa May’s Withdrawal Agreement, Speaker John Bercow is once again preventing British MPs from voting on the latest Brexit deal negotiated with the EU. Bercow’s decision to block another meaningful vote on Monday is due to Parliament being prevented from voting on the same motion twice. As such, British MPs will now look to tack on amendments to the Prime Minister’s Brexit bill – likely calling for a confirmatory second referendum or customs union arrangements.

Though there is doubt over whether these amendments can find enough backing to reintroduce the recently brokered Brexit Withdrawal Agreement. Parliament will continue to debate Brexit deal amendments in the House of Commons today. PM Johnson hopes to put his Brexit deal up for another meaningful vote later this week and potentially as early as Tuesday. Also, following Boris Johnson’s defeat over the weekend, the PM formally submitted another Brexit extension request to EUCO President Donald Tusk to push back the current October 31 Brexit deadline.

With the original Brexit date initially set for March 29 earlier this year and the EU27 agreeing to kick the can twice already, PM Boris Johnson adamantly claims he will do all he can to “get Brexit done on October 31” and told EU leaders that “further [Brexit] delay is not a solution.” If the ongoing impasse in UK Parliament continues and a frustrated EU27 falls short of unanimously approving another Brexit extension, the British Pound’s recent rally has potential to reverse quickly as no-deal Brexit risk comes back into scope. 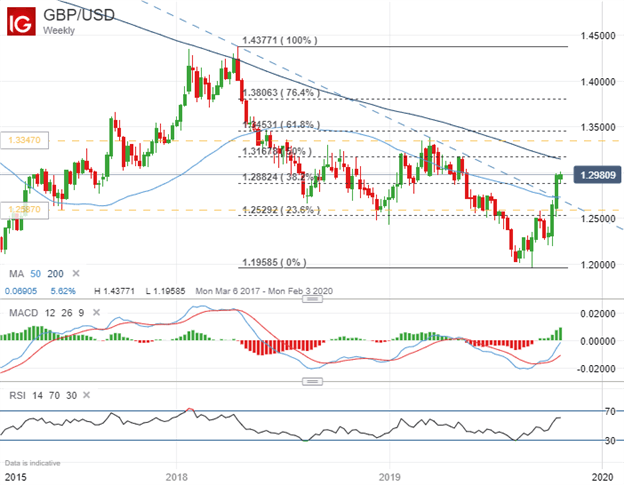 GBP/USD continues to climb, however, as it is widely expected that the leaders of the EU want to avoid no-deal Brexit and the associated economic hardship that will likely ensue. Nevertheless, GBP/USD volatility is expected to persist as Brexit uncertainty lingers. GBP/USD implied volatility for the 2-week options contract (encompassing the current October 31 deadline) was most recently clocked at 14.98%. As such, spot GBP/USD prices are estimated to fluctuate between 1.2587-1.3347 with a 68% statistical probability over this time frame judging by GBP/USD 2-week implied volatility of 14.98%. 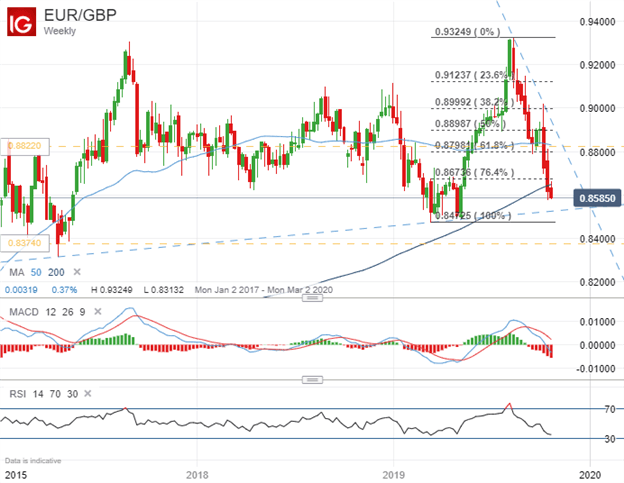