A series of fundamental factors have bolstered the standing of the DAX 30 and CAC 40, which have subsequently pushed through various levels of resistance. As the Brexit saga continues to unfold, the two indices could look to extend their runs higher, but subsequent resistance stands in their way and retail traders are convinced the rally is overdone. With that in mind, the contrarian nature of retail trader data could suggest trend continuation is in store.

That said, resistance to the topside will be of critical importance in the event of sustained bullishness. The immediate hurdle – albeit somewhat minor – resides around 12,700. But more importantly, however, a confluence of resistance marked by the ascending trendline from December and horizontal resistance from July 2018 will look to stall an extension above 12800. Should the two levels be surmounted, the next notable area of resistance may rest at 13200.

If, on the other hand, retail traders are correct in their assumption that the DAX 30 is overbought, technical support at the 12460 and 12210 levels will look to buoy the German Index before the 200-day moving average can assist around 12050. 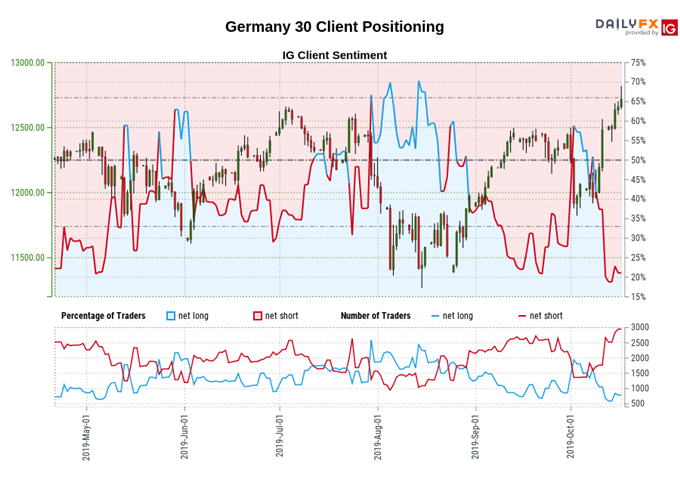 Retail trader data shows 27.99% of traders are net-long with the ratio of traders short to long at 2.57 to 1. The number of traders net-long is 5.83% lower than Wednesday and 29.83% lower from last week, while the number of traders net-short is 6.67% lower than Wednesday and 36.00% higher from last week. We typically take a contrarian view to crowd sentiment, and the fact traders are net-short suggests Germany 30 prices may continue to rise – bolstered by the divergence in short and long interest.

The French equity index, the CAC 40, finds itself in a similar position to the DAX. Soaring to its highest level since December 2007, the CAC has pierced multiple levels of resistance in recent weeks as it looks to reclaim levels not seen in this decade. A familiar trendline from December will look to rebuke the CAC’s rally, residing around 5745. At this time, the level appears to be the sole technical hurdle between the Index and the more robust resistance around 5900 which could allow for another quick surge if bullishness persists. 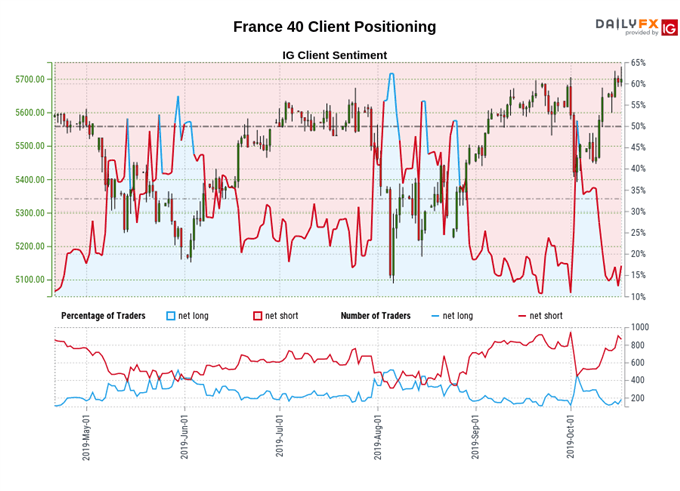