Sterling fell sharply early Wednesday after the UK government said that the chances of a Brexit deal ‘are currently low’ with the DUP said to be holding up progress. A split is said to have appeared in talks late last night with Eurosceptics and the DUP unhappy with the proposed deal. The DUP said yesterday that it remains firm that Northern Ireland stays in the UK’s customs union and that there would be no customs checks between NI and the UK. The DUP support is vital if PM Johnson is to get the numbers to pass the deal through Parliament.

Talks are still ongoing between the two sides and EU chief negotiator Michel Barnier is expected to brief EU ambassadors around 12:00 GMT todayon any further progress.

Today’s reality check has taken Sterling traders by surprise after yesterday’s one-way move. GBPUSD has fallen by around one cent from yesterday’s high around 1.2800, while EURGBP has retraced around 80 ticks of yesterday’s sell-off. EURGBP touched a five-month low of 0.8626 on Tuesday and reasonable technical support is not seen until the pair hit a cluster of low prints between 0.84725 and 0.84907. Below here support is pegged off the April 2017 low at 0.83133. To the upside, resistance between 0.87510 and 0.87550 before the 61.8% Fibonacci retracement level at 0.87980. 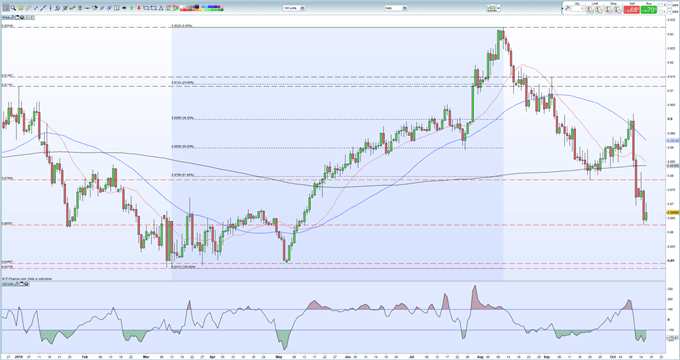