Markets are filled with optimism from ongoing US-China trade negotiations this week set to conclude later today, but risk appetite is getting another boost on the back of a positive consumer sentiment report from the University of Michigan.

The headline Consumer Sentiment Index came across the wires at 96.0, which widely beat expectations of 92.0 as consumer sentiment was lifted by lower interest rates and subdued inflation expectations.

Gold prices continue to sink through mid-morning trading as the consumer sentiment report further lifts risk-on sentiment across the market initially sparked by upbeat US-China trade talk headlines. Gold is now trading under the 1475.00 level – the yellow metal’s lowest point since October 1st. US Treasury Yields continue to move up and adds to their weekly gains. The 10-Year yield shot up to 1.753%, which is the highest level since September 20th. Equity markets continue their enthusiasm into the final trading session of the week as the S&P 500 breaks above the 2980 level. 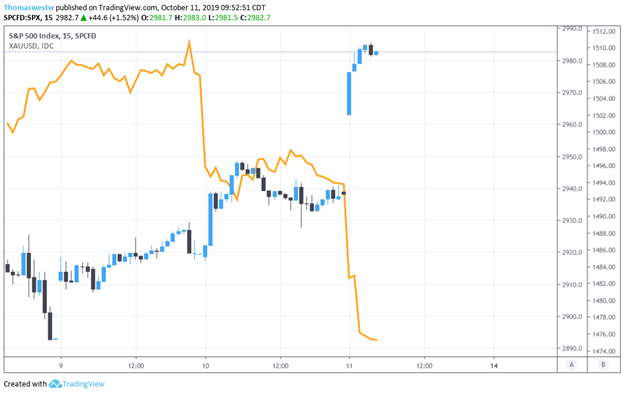 It appears that the recent dovish policy action from the Federal Reserve is influencing consumer sentiment. Consumers outlook for the overall economy remain relatively subdued, however, as the consumer expectations component reading for October is down 5% year-over-year. Yet, consumers reported modestly higher spending plans and they expect lower inflation and higher earnings going forward. Consumer 1-year inflation expectations dropped from 2.8% in last month’s report to 2.5% this month. Looking ahead it appears FOMC members are more divided and lack of additional interest rate cuts could hinder future spending plans for durable goods. Although, markets are still pricing a 64.6% chance of a cut later this month according to overnight swaps. 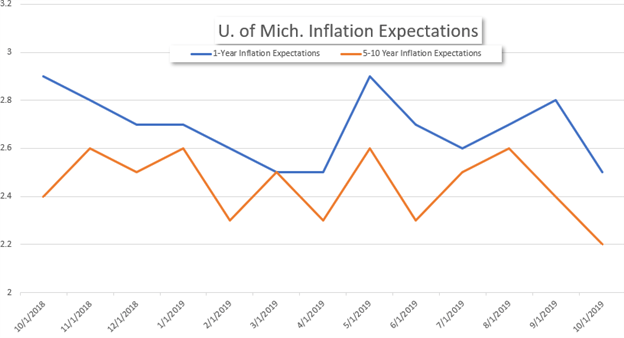 Nevertheless, while the latest consumer sentiment report provides traders with a sign of encouragement, risk appetite going forward hinges predominantly on the final outcome of this week’s US-China trade talks. President Trump is set to meet with China’s top negotiator Vice Premier Liu He in the Oval Office Friday afternoon. Markets are currently expecting substantial progress to be made toward reaching a trade deal or the removal of scheduled tariff increases with speculation swirling over a potential currency pact between the world’s largest two economies.