The Australian Dollar slipped Tuesday following the release of minutes from the Reserve Bank of Australia’s September monetary policy meeting which kept the prospect of lower interest rates very much alive.

At that event, on September 3, the RBA opted to leave the key Official Cash Rate on hold at the record low of 1% that’s been with us since July.

The RBA said it was ready to consider further policy easing as needed to support growth and inflation targets, while it was reasonable to expect an extended period of low interest rates. None of this was especially new but its emphasis was probably enough to curb Australian Dollar bulls in a market quite hostile to growth sensitive assets anyway thanks to last weekend’s drone strikes on Saudi Arabia. 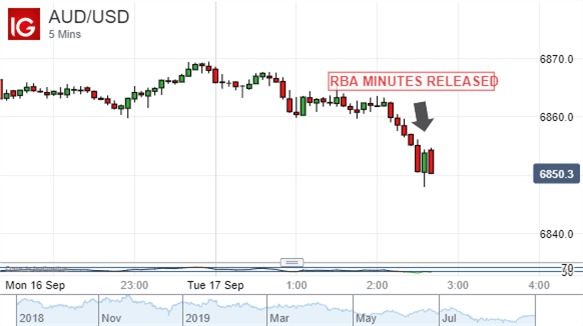 AUD/USD had been drifting lower before the release in any case.

The RBA noted that local industry had weathered trade war storms somewhat better than most but said that upward wage pressure appeared to be stalling. Rate setters said a further, gradual lift here would be a welcome development.

They were also gloomy about US-China trade relations, although these have seen a notable improvement since the start of this month and it will be interesting to see whether this is acknowledged at the next meeting.

The Australian Dollar has certainly bounced powerfully from eleven-year lows made against itsUSrivallast month. The overall backdrop has become a lot more Aussie friendly given signs of a thaw in trade relations between China and the US.

This story feeds back to the growth-correlated Australian currency in many ways, be it via general support of global growth prospects or though Australia’s close trading and political links with both countries. 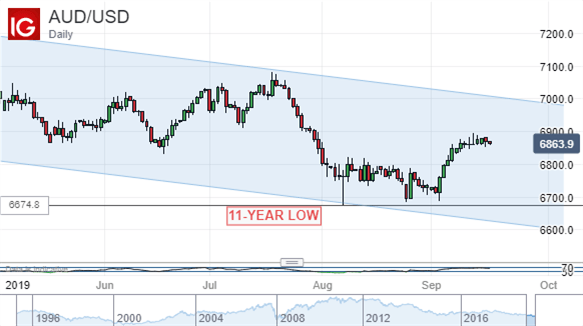 The prospect of more stimulus from the world’s monetary authorities has been raised by action already taken last week by the European Central Bank. Global markets are hopeful for more of the same from the Federal Reserve this week.

The current focus on oil prices has seen a modes risk rethink but this seems unlikely to last as long as Saudi oil production is seen to be recovering from last weekend’s ruinous drone strike.

The Australian Dollar still lacks monetary support of its own, however. The key Official Cash Rate stands at a record low of 1% and is expected to fall further yet. Domestic inflation is stickily low, and AUD/USD remains well within the downtrend channel which has contained trade since early 2018.