The Australian Dollar slipped initially but soon recovered Tuesday as the Reserve Bank of Australia cut interest rates for a second month straight.

Justifying its action, the RBA said that another reduction would help utilize spare capacity, boost inflation and assist in job creation. No doubt there will be those who wonder whether another cut will really help all that much after such a long period of relatively low rates, but the cut was not a surprise to the markets which anticipated such a move either this month or in August. 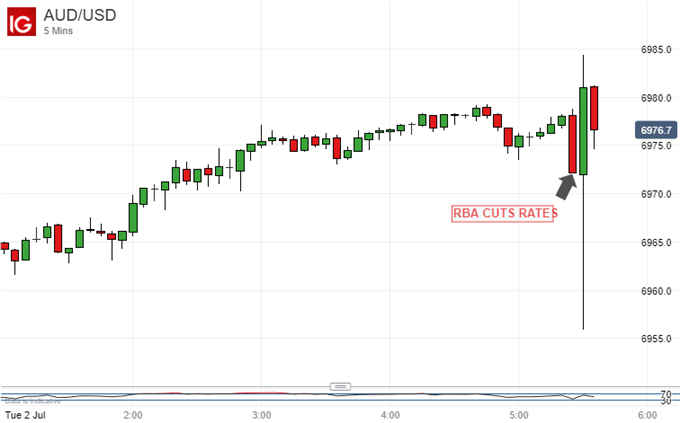 AUD/USD took an immediate hit on the news but its composure since attests to the market already pricing in the move. The RBA didn’t give much away as to how things might play out from here, but it did say in a statement that it was ready to support growth and inflation as needed so further cuts cannot be ruled out by any means.

On its daily chart the Australian Dollar has risen since late June despite a clear lack of monetary policy support, thanks to a couple of supportive factors. The clearest of these was probably broad US Dollar weakness. The markets moved last month to price in lower US interest rates from the Federal Reserve. This prospect in turn engendered a revival in risk appetite, something which also helped the Australian Dollar, linked as its fortunes are to global growth prospects. 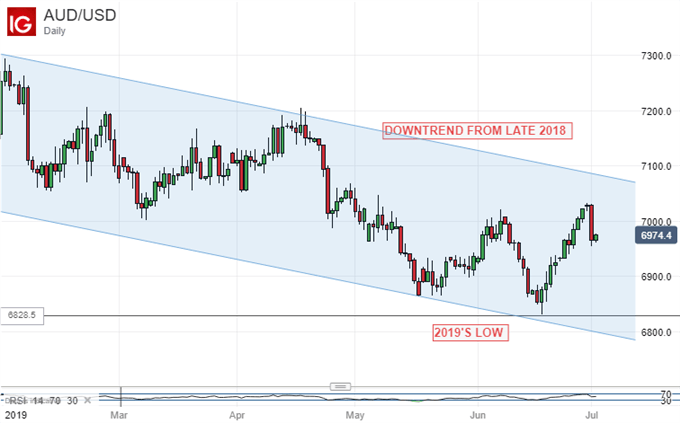 The bar to deeper rate reductions in Australia may be higher than the market thinks. RBA Governor Philip Lowe has often mused on the likely diminishing efficiency of stimulus under current, already loose monetary conditions.

Still, the markets will probably doubt that they’ve seen the end of the easing cycle in Australia unless the economic data make that impossible and, as that is likely to mean that inflation must pick up sustainably, that evidence will take time to collect.

This move is likely to keep a lid on the currency, which no doubt it was partially intended to. A weaker Australian Dollar may make that elusive inflation target easier to hit.