A look at the latest chart shows a near 50% retracement of the May 5 – August 12 EURGBP rally, leaving traders looking for clues for the next move. The rally was primarily fueled by GBP weakness, as Brexit fears increased as then PM Theresa May’s role came to a fractious end, only to be replaced by current PM Boris Johnson whose leadership has been undermined, internally and externally, ever since he accepted the role in late-July. While the UK Parliament is now suspended for five weeks ahead of the Queen’s speech, Brexit news flow will continue to dictate the fortunes of the British Pound.

In Europe, this week’s ECB monetary policy meeting (Thursday September 12) is expected to see the central bank cut interest rates further into negative territory and either announce details of or start a new round of bond buying (quantitative easing) in a renewed push to boost the ailing Euro-Zone economy. The ECB may even cut rates by more than expected – current expectations are 10 basis points to -0.50% - to get ahead of the game and the central bank may provide even more dovish guidance for the months ahead.

Live Coverage of the ECB Meeting from 11.30 GMT on Thursday - Webinar

Both Brexit and expectations of ECB monetary loosening have impacted on their respective currencies in the last weeks, with both showing renewed weakness. As mentioned early, this year’s EURGBP rally has partially reversed, leaving the daily chart offering a few levels that need to be monitored.

The 50% Fibonacci retracement level of the move is set at 0.89077, a level briefly touched on Monday before today’s minor rebound. This Fib level guards the July 25 low at 0.88918 before the 200-day moving average at 0.88180 and the 61.8% retracement level at 0.88093 come into play. These levels need to be monitored by traders who believe that that Sterling will outperform the Euro in the short-term. 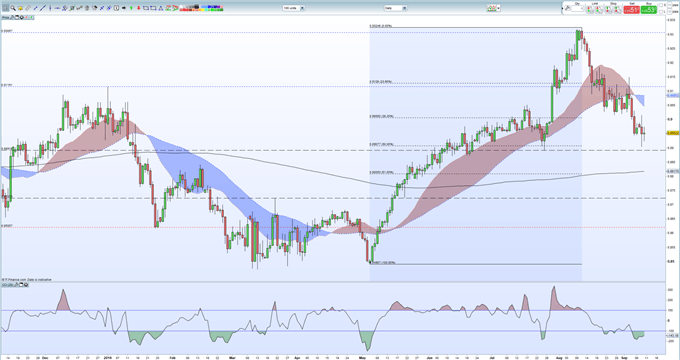 IG Client Sentiment data show that of retail traders are 33.7% net-long of EURGBP, a bullish contrarian indicator. However, recent daily and weekly positional changes give us a strongerEURGBPbullish contrarian bias.

What is your view on Sterling and the Euro – bullish or bearish?? You can let us know via the form at the end of this piece or you can contact the author at nicholas.cawley@ig.comor via Twitter @nickcawley1.