See our quarterly gold forecast to learn what will drive prices throughout Q3!

Yesterday’s ISM Manufacturing PMI, which fell in contractionary territory for the first time since 2016 reiterates the concern that a global manufacturing recession is taking place with the US seemingly vulnerable to the negative spillover effects from the global slowdown. Therefore, risks remain tilted to the upside for precious metals as the Federal Reserve look to respond to the current slowdown. Overnight, commentary from the most dovish Fed rate setter, Bullard, had opened the door to a 50bps cut, having stated that such a cut in interest rates would align central bank with market expectations, keep in mind that James Bullard had previously stated that a 50bps reduction would be seen as overdone. As such, with the Fed likely to continue its easing path, there is room for gold prices to edge higher.

In the short term, there is a potential for a modest pullback following reports by SCMP that Hong Kong’s Lam is to withdraw the extradition bill. Consequently, this has spurred a risk on rally with the Hong Kong surging over 4% on the news, thus gold prices are edging lower.

Silver prices surged through $19/oz after posting its strongest daily gain (+4.2%) since July 2016, hitting a peak of $19.56. Consequently, as we had previously signaled, silver has outperformed gold with the ratio dropping to 80 from the near 30 year peak of 92.70. That said, with the GSR 30-year average at 67.50, there is room for further outperformance of silver over gold. 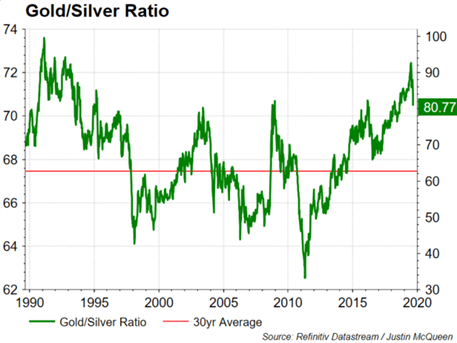