The Australian Dollar rose Wesdnesday in response to an as-forecast set of second-quarter Gross Domestic Product figures which, while not great, did at least dispel some late suspicions of a much weaker showing.

Growth was 0.5% on the quarter, 1.4% on the year, the former being a joint-weakest showing since 1991. However, after Australian Prime Minister Scott Morrison cautioned earlier this week that the numbers could be ‘soft’ the market had been braced for anything,

Relief was palpable in AUDUSD. 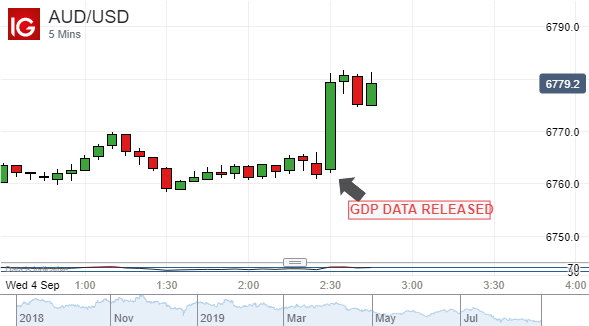 Still, it was notable that private consumption remained weak and that growth was being propped up by government spending and exports. Australia saw a very large current account surplus in the second quarter, boosted by exports of iron ore at very high prices as outages at other producers, notably Brazil, forced substitution in favor of Australia.

Ore prices have fallen sharply in recent days, and it is extremely unlikely that this former source of support will be repeated in a world where end demand for steel is in such doubt.

The Australian Dollar remains close to eleven-year lows against its US rival on the daily chart, with its latest downtrend only an extension of the overall slide seen since the end of 2018 as domestic interest rates have made a series of new record lows. 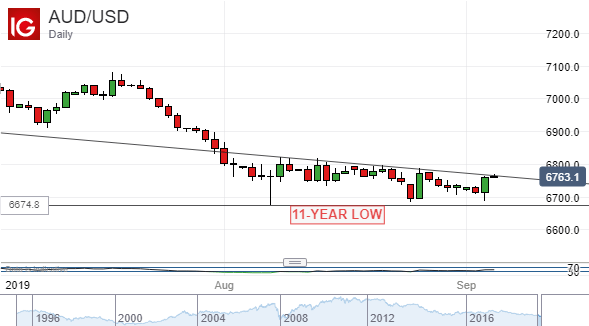 The RBA declined to cut them further this week but the market still expects two further reductions in the 1% Official Cash Rate, taking it down to 0.5% by April or May next year. Inflation in Australia remains stubbornly low even as the labor market holds up.

More broadly the currency has of course been hit by worries about global growth as it is perhaps the global markets’ favorite ‘risk on’ currency play. As recession fears have grown the Aussie has clearly lost out to perceived haven asserts like the Japanese Yen.

This survey is certainly running ahead of the official PMI. That is much gloomier. It is possible that the Caixin variant focuses more on domestically focused business which is less hard-hit by tariffs and trade war fears generally.

AUDUSD remained close to session highs after the data.