The Australian Dollar rose a little Monday on news of a surprise return to expansion for Chinese manufacturing.

The August Purchasing Managers Index snapshot from media group Caixin came in at 50.4, for its highest reading since March and the first return to growth in three months. In the logic of PMIs any reading below 50 signifies contraction in the sector. The Caixin survey focuses on smaller, private concerns in contrast to the large, usually state-run enterprises recorded by the official PMI.

AUDUSD rose in the aftermath although the effect of the data may have been somewhat muted by comments from Australian Prime Minister Scott Morrison which crossed the wires just before. Morrison said he expected ‘soft’ second quarter growth data this week. 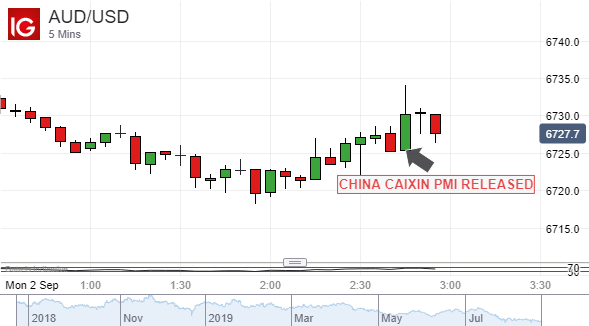 On its daily chart the Australian Dollar remains clearly unloved and close to eleven-year lows. The currency faces huge hurdles both global and domestic. It’s arguably the currency market’s favorite play on both global and Chinese growth, with both in question as they’ve not been since the financial crisis. It’s also perhaps the currency of the nation with as much skin in the US-China trade war game as any third party. 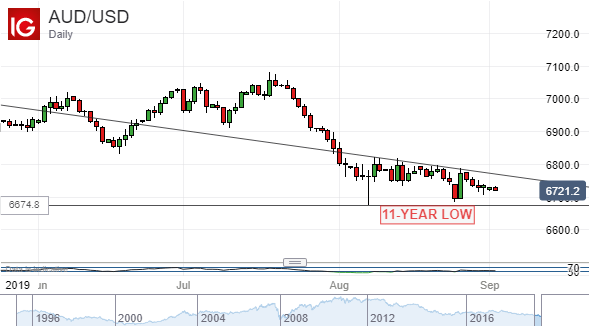 Domestically Aussie bulls have had to cope with interest rates falling to a new record low of 1%, and with the fully-priced prognosis that at least two more quarter-point reductions are coming. The Official Cash Rate is thought likely to remain steady at the Reserve Bank of Australia’s Tuesday policy meet however.

The market is also looking with some trepidation to official Australian GDP data due on Wednesday. Even if this series holds up beetter than the Australian Prime Minister expects it may be viewed as historic given the trade and recession worries which have roiled financial markets in the past month.

Commodity price weakness is also weighing on the Australian Dollar, with the price of key Australian export iron ore collapsing through the month as investors fret weak end-demand in a slowing world. The price of this commodity can be a key currency driver.