The Australian Dollar is close to eleven-year lows against its big US brother and the market probably didn’t need another reason to be bearish on the currency. It might have got one last month though as iron-ore prices took a massive hit.

According to the IODEX measure from Platts which indicated the spot price paid for most of the ore delivered to China, prices were down 27% through August. The commodity is Australia’s major raw material export, among many. But a world worried about recession and trade war clearly isn’t going to need as much of it. 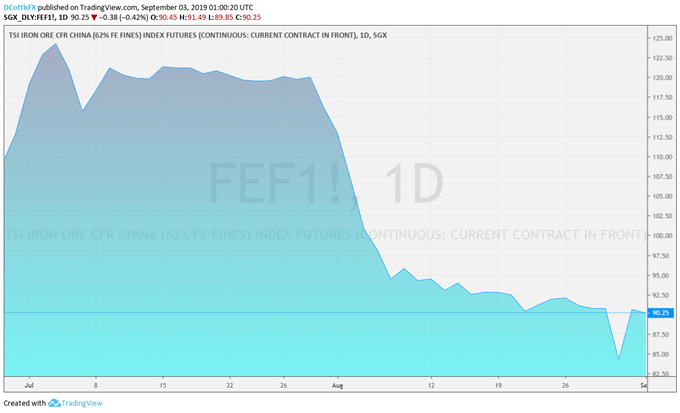 It’s worth pointing out that iron ore prices have been highly volatile this year. January’s lethal damn-burst disaster in Brazil saw supply from that quarter limited and drove prices up some 75% on the year to July’s peak. This rise may have slowed AUDUSD’s decline this year. Australia also saw a very steady rise in exports into June, when they hit record levels, as markets increasingly looked to the country for supplies. Still, the market appears to be rebalancing and, with prices falling, Aussie Dollar traders would do well to keep a close eye on where it goes from here.

Iron ore exports ran at around A$9 billion (US$6 billion) per month in May and June, so the potential effect on the Australian Dollar is clear. Those months look to have been outliers, though, with somewhere between A$4 and A$6 billion far more usual. A return to those sorts of levels might well weigh on the currency. There has been better news for Australia in other parts of the commodity complex, too. Nickel prices have gained, for example, thanks to a proposed export ban in Indonesia. However Australian nickel exports are worth only a fraction of its iron ore earnings.

Australian Dollar trade is often seen as a function of huge global themes. The currency can at times act as a liquid China-market proxy, or a as a proxy for overall risk appetite, so tied can it seem to the global cycle. This has clearly weighed on AUDUSD this year, as has the relentlessly lower path of Australian interest rates.

They’re now at a new record low of 1% and the markets think they’ll hit 0.5% by the middle of next year.

But amid all those themes there’s Australia’s real economy, and iron ore exports are about as real is it gets.

Whether we see more volatility or an extension of August’s falls, Aussie Dollar traders need to know.