The British Pound rose against its major peers on Tuesday amid rising bets that the United Kingdom could avoid a “no-deal” exit from the European Union. Sterling’s upside momentum began with comments from Labour Party Brexit Spokesman Keir Starmer. He said that legislation “must be” in plans to stop a no-deal divorce from the EU, adding that the party would campaign for Remain in a second referendum.

The GBP accelerated its rise after reports that UK Prime Minister Boris Johnson was going to speak with EU Commission President Jean-Claude Juncker. They are to discuss options on replacing the Irish Backstop, a key sticking point that Johnson wants removed in order to resume negotiations. The Prime Minister said he thinks there is still enough time to agree on an alternative to the arrangement.

Meanwhile, the anti-risk Japanese Yen outperformed against its major counterparts as sentiment deteriorated during the Wall Street trading session. There continues to be uncertainty around US-China trade updates in the aftermath of the weekend G7 Summit in Biarritz, France. As a reminder, US President Donald Trump sent stocks rallying after he said China called him to initiate restarting talks.

Since then, the markets have received multiple signs from China disputing the phone call. The first came from the Global Times on Monday. Over the past 24 hours China’s Foreign Ministry spokesman Geng Shuang said that he was not aware of it either. By market close Tuesday, the S&P 500 finished 0.32% to the downside as the yield curve inverted further. The pro-risk Australian and New Zealand Dollars underperformed.

Another relatively quiet Asia Pacific trading session to start off Wednesday places the focus for currencies on market mood. Equities are exposed to stray headlines regarding trade wars, such as continued dispute from China about the phone call with Mr Trump. S&P 500 futures are little changed with a cautious upside bias, but lasting follow-through will likely depend on further clarification from the two nations.

Taking a closer look at GBP/USD, the pair’s upside progress was tamed by descending resistance from April. If it holds, its next path may be lower and in line with the dominant downtrend. The presence of negative RSI divergence shows fading upside momentum which can precede a turn lower towards support at the March 2017 lows around 1.2109.

This is supported by positioning signals as IG Client Sentiment offers a stronger bearish GBP/USD contrarian trading bias. An uptick in net-long bets from yesterday and the previous week is alluding to this signal. If you would like to learn more about using this in your own analysis, join me every week on Wednesday’s at 00:00 GMT here. 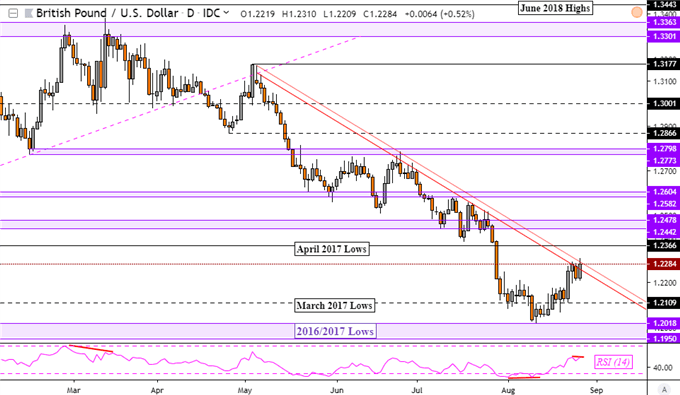