Risk trends were in for a wild ride at the beginning of the week, initiated by fundamental developments going back to last Friday. As anticipated, the anti-risk Japanese Yen strengthened while the sentiment-linked Australian Dollar weakened at market open Monday after trade tensions between the United States and China escalated. Heading into European markets however, those concerns faded.

According to US President Donald Trump, he received a phone call from China about wanting to restart trade talks. Later in the session, Mr Trump then downplayed reports from the Global Times that the two nations didn’t hold phone talks. He said that he was not aware of them disputing the calls, afterwards adding that China “very much” wants to make a trade deal.

While S&P 500 futures declined sharply at this week’s open, the index ended up trading 1.10 percent to the upside on Wall Street. The Japanese Yen gave up its strength as the Australian and Canadian Dollars outperformed. US durable goods orders were a mixed bag, rising 2.1% in July versus 1.2% anticipated. But, excluding transport, those contracted 0.4% versus 0.0% expected.

There was also a recovery in US government bond yields which ended up working against anti-fiat gold prices as the US Dollar gained. On a daily chart, this left XAU/USD with a Shooting Star candlestick after resistance held at the 78.6% Fibonacci extension. Prices closed right around the previous highs from earlier this month, but still confining to the dominant uptrend from the end of May.

The Shooting Star is a sign of indecision which coupled with negative RSI divergence, offers a preliminary warning that there may be a top in the works. This is as IG Client Sentiment offers a bearish-contrarian gold trading bias. If you would like to learn more about using this in your own analysis, join me every week on Wednesday’s at 00:00 GMT here. 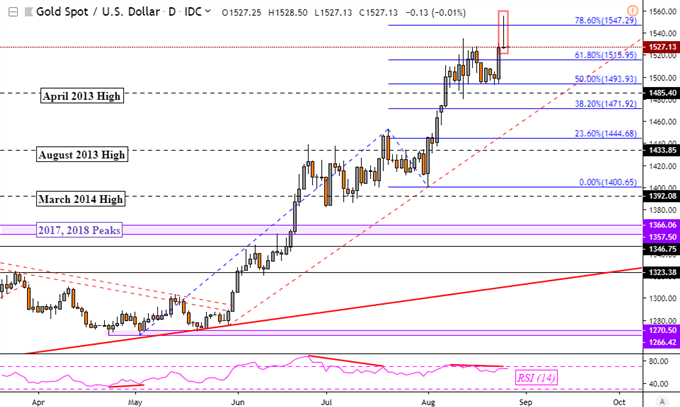 Given the developments over the past 24 hours, S&P 500 futures are little changed heading into Tuesday’s Asia Pacific trading session. A lack of critical economic event risk places the focus for foreign exchange markets on market mood. As such, incoming updates on US-China trade progress is likely to drive equities in the near-term.