Learn how to identify and trade political risk here!

The New Zealand Dollar fell against most of its major counterparts after ANZ business confidence data came in at -44.3, worse than the previous reading at -38.1 and is now resting at its lowest point since September 2018. Deteriorating global growth and a major slowdown in China – New Zealand’s main trading partner – has negatively impacted the export-dependent economy. 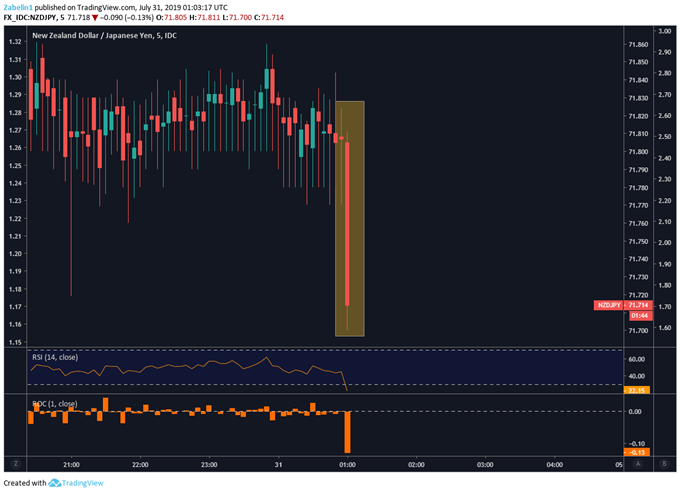 The Reserve Bank of New Zealand (RBNZ) has already cut the benchmark overnight cash rate once this year from 1.75 percent to 1.50 percent and has hinted at introducing additional “unconventional” monetary policy measures to boost inflation. One of the biggest factors that will likely continue to impact officials at the RBNZ is the US-China trade war which may get worse before it gets better.

THERE WILL BE A ‘GREAT DEAL’ OR NONE AT ALL: US-CHINA TRADE WAR UPDATE

United States Trade Representative Robert Lighthizer and a US delegation are currently in Shanghai attending a two-day meeting with their Chinese counterparts to discuss US-China trade relations. The talks are not expected to bear any meaningful fruit but will likely end with both sides offering small gestures of good faith as a way to show Beijing and Washington are making progress.

However, commentary and policy measures from the White House say otherwise – quite literally. US President Donald Trump expressed his dissatisfaction with China, complaining that “they just don’t come through”. Two weeks before that, Trump ordered the Defense Department to increase production of rare earth magnets out of concern China may use its mineral ban as leverage in the negotiations.

What other leverage can China use in trade negotiations?

Looking ahead, traders will continue to anxiously bite their nails to see whether Mr. Trump’s predilection for unexpected policy announcements will persist with China. There is no telling when an expected Tweet embedded with trade measures could catch markets off-guard and stoke volatility. In the past, such scenarios have typically resulted in a risk-off tilt with the US Dollar and Japanese Yen emerging as victors.

The meeting between Mr. Lighthizer and Chinese officials will conclude on July 31, the same day the FOMC will be announcing its rate decision. The central bank is expected to cut rates by 25 basis points in light of the deteriorating economic conditions, in large part due to the US-led trade tensions with China and its allies. The IMF’s recently published updated economic outlook cited this same risk as the primary headwind to growth.