Spot USDCNH price action has so far stabilized this month with the currency pair holding a firm range between the 6.8500 and 6.9000 levels following positive US-China trade war developments made at the G20 Summit. Although US President Trump and Chinese President Xi failed to reach a trade agreement, which has been highly anticipated by markets for quite some time, trade relations between the world’s largest economic powerhouses took an apparent turn for the better. The development has boosted the Chinese Yuan relative to the US Dollar and is reflective of the deceleration in Sino-American trade tension.

Now, the latest headlines are suggesting that US China trade talks will resume over the next week between US Treasury Secretary Steven Mnuchin, US Trade Representative Robert Lighthizer and China’s Vice Premier Liu He. The most likely scenario expected out of these talks is for more of the same with reports of ‘constructive discussions’ and ‘progress toward a deal.’ Nevertheless, the door remains open for potential fallout over hardline issues that remain major hurdles for trade negotiators to overcome.

Rhetoric between the two countries remains skeptically-optimistic at best considering the outstanding risk of US President Trump threatening additional tariffs on Chinese goods. Meanwhile, the PBOC stands ready to respond by pumping monetary stimulus into its financial system by cutting Yuan’s exchange rate versus the US Dollar aiming to offset the cost of tariffs. Indeed, Friday’s Q2 US GDP report could be another source of currency volatility and spot USDCNH is far from immune to the market’s reaction – particularly considering that second quarter economic output will encompass the US China trade war escalation that began early May.

That said, the 1-week implied volatility reading on spot USDCNH of 2.55% appears considerably low. This might suggest that more positive developments are expected out of upcoming US China trade talks. Conversely, expected spot USDCNH price action could be underpriced by currency option traders with the 1-week measure flirting with its lowest level in 2 years. Nevertheless, if implied volatility measures derived from at-the-money forex option contracts are to be believed, spot USDCNH could be expected to trade between 6.8588-6.9074 with a 68% statistical probability over the next week. 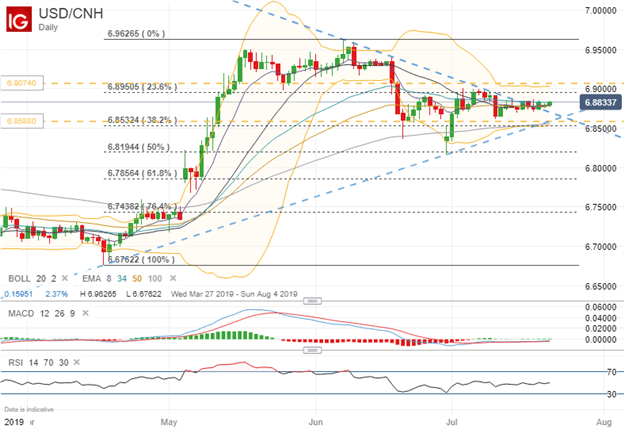 Looking closer at spot USDCNH price action, upward pressure could be around the corner as suggested by the breakout above bearish trendline resistance formed from the series of lower highs since June 7. The next major area of technical resistance for spot USDCNH bulls is likely the 6.9000 handle, which has previously served as an area of confluence, and also closely aligns with the 23.6% Fibonacci retracement level of the currency pair’s trading range since April 17.

On the other hand, a test of bullish trendline support could be targeted by spot USDCNH bears. If this area of support near the 6.8500 handle gives way, it may indicate progress in US China trade talks and a positive turn for risk appetite, which has potential to open the door to for spot USDCNH to target the June 30 swing low.