Puzzled By AUD Gains As Rates Fall? Blame the Fed and Iron Ore

The Reserve Bank of Australia delivered a rare series of back-to-back interest rate cuts with its July reduction of the Official Cash Rate to just 1%.

And what happened to AUDUSD? Well, it has risen since. Indeed, it has made the only the second serious attempt at the upper boundary of its long-term downtrend channel since early 2018. 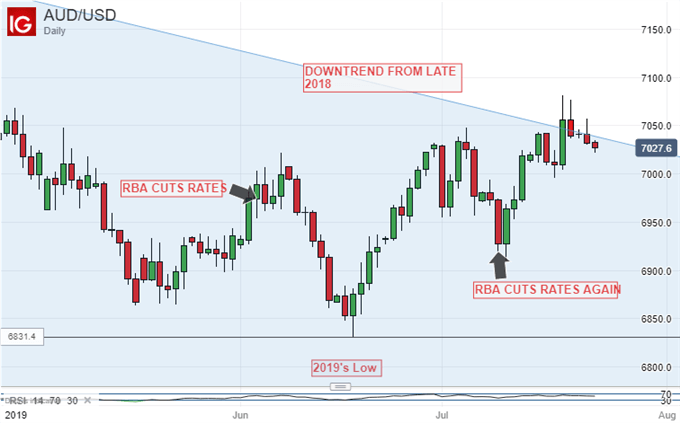 Clearly all else being equal a dramatic fall in interest rates should have seen the Aussie slide, even if the moves were quite well expected. Of course, all else is never equal and one or two factors have conspired to push the Aussie up.

First of course there’s the US Federal Reserve. It has moved over a similar time frame from waiting and seeing to priming the markets for an interest rate cut of its own, possibly as soon as this month. A quarter-point cut to the Fed Funds Target Rate on July 31 is now judged a 76% probability according to the Chicago Mercantile Exchange’s popular Fedwatch tool.

This prospect has weakened the Greenback across the board, with the Australian Dollar participating fully despite its own low yield.

But there’s another factor in play which, while probably less important than the Fed, is a useful reminder of how many different hats the Australian Dollar wears as an investment asset. Iron ore prices have risen steadily through this year, despite worries about global growth, as bad weather in Australia and a deadly dam breach in Brazil have weighed on global supply. Both countries are massive exporters of ore. Chinese demand has also held up.

Now the price is close to US$120 per tonne, having started the year down a $70. Chinese buyers of vital Australian ore need Aussie Dollars to pay for it, so it’s not hard to see a major source of support for the currency at these elevated price levels.

Now, neither iron ore prices or the Fed need necessarily lighten the big bearish weight which has dragged the Aussie lower over the past two years. There’s unlikely to be a major reversal of the Aussie’s downtrend while domestic inflation remains subdued and base rates are on the mat.

But both bear very close watching in the near term. They’ve certainly got the power to slow the Australian Dollar’s rate of descent, particularly as markets feel that the RBA has done most of the monetary easing it’s likely to undertake in this cycle.