AUD Bulls Can’t Count on the RBA, But Iron Ore Prices May Slow Its Fall

The Australian Dollar remains stuck in an entrenched downtrend on its daily chart, but at least one prop seems to be strengthening markedly: iron ore prices.

Tech may rule the headlines but, when it comes to the global real economy, we still live in the iron age and Australia is the world’s number one exporter of the industrial staple. Moreover, prices have risen sharply this year, by more than 50%. Supply has tightened, a process exacerbated by a fatal dam collapse at Brazil’s Córrego do Feijãomine near the village of Brumadinho in January and indeed by cyclones in Australia.

Already over $99/tonne, some analysts think the commodity’s price could hit $120 this year according to a Reuters report. It seems that incipient trade war has done very little so far to dent demand for ore, with key Chinese dockside inventories falling sharply.

The days when higher ore prices could shore up the Australian Dollar on their own are long gone, as a look at the AUD/USD chart over the past year will prove. 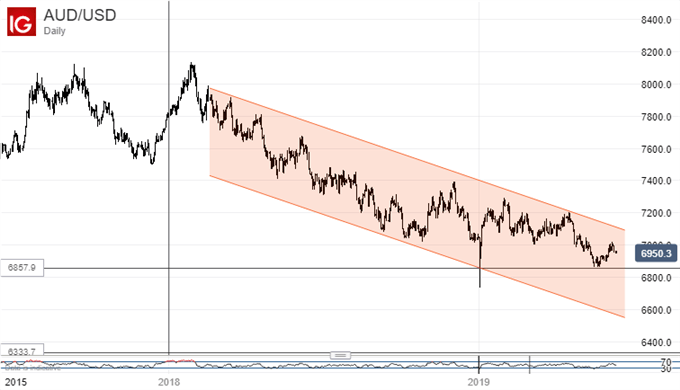 Lack of Interest Rate Support is in the AUD/USD Price

The true gravity of this market is no longer commodity prices but rather interest rate comparisons and here the Australian Dollar is clearly still feeling the strain. Lat year’s falls came as US interest rates rose. That process may very well be over but there’s no respite for the Aussie. The Reserve Bank of Australia cut its Official Cash Rate to a new record low of 1.25% last month. It’s expected to cut again very soon and, perhaps to continue into next year. Deep cuts may be less certain than the markets believe, but another one, at least does seem likely.

However, a lot of this bearish news is already priced in by now to a market well used to a complete lack of monetary policy support. A sharp rise in iron ore prices probably cannot turn around the Australian Dollar’s fortunes on its own, especially while broad domestic inflation remains weak. But they do still bear close watching.

If iron ore does become durably more costly from here, AUD/USD’s pace of decline could be seriously slowed. If 2019 is a better year for Aussie bulls than its predecessor, iron ore prices are likely to be one key reason why.