Continued monetary and fiscal stimulus creates dependency, with further problems arising when interest rates hit zero and ventured into negative territory. It has happened before in Japan, Denmark and Switzerland, and now the European Central Bank seems fixed on keeping deposit rates negative for the foreseeable future. The key focus is whether negative rates starve off inflation and spur economic growth, as they are intended to do, but evidence suggests that they provide little to no benefits compared to low, but positive, rates.

Current deposit rates stand at -0.4%, meaning that banks are charged to deposit funds with the ECB, in hopes that money would flow into the economy, but the effectiveness of the transmission channel from banks to the general population seems to be disappointing. Even though negative rates allow banks to receive cheaper funding, the reality of being able to pass those rates on to clients when depositing funds means that banks suffer a squeeze on their profitability margins. There has been no significant evidence that lower rates increase the amount of loans, because of negative underlying factors like unemployment and stagnant growth, which reduces the effectiveness of monetary policy in dealing with low inflation.

But now the ECB is considering cutting rates lower because the landscape has changed dramatically in the last few months, as the debate not that long ago was whether to increase rates and by how much. But now most central banks are trying to grasp by how much to cut rates, as the fact they need to cut seem to be fully acknowledged by now. And new ECB President Christine Lagarde supports the use of negative rates and bond purchases to steer the economy towards growth, a legacy she will inherit from Mario Draghi when she takes place in November.

Policy makers will be keeping a close eye on Eurozone inflation figures to be released on July 17, with expectations for the figure to remain stable from May’s reading of 1.2% YoY, and a monthly growth of 0.1%. If the figure comes in below expectations, there is an increased risk of the Eurozone facing a period of deflation, strengthening the case for the need to have rate cuts further. German inflation figures will be released on July 19 and will also play a part in the ECB monetary policy decision as the Eurozone’s largest economy has been facing a period of contraction and slowing demand.

Federal Reserve Chairman Jerome Powell sent the USD tumbling and worldwide equities higher on Wednesday as he changed his view on lagging inflation, pointing out that weak inflation could be more persistent than initially thought. He reiterated that the Fed would act appropriately given data on economic growth and inflation, reaffirming investors’ belief that interest rates will be cut in the July meeting by at least a quarter point, with an increase in the possibility of a 50-basis point cut.

He remarked that the upbeat June jobs report did not change the Fed’s outlook on the health of the economy, as a broader outlook is taken to define monetary policy, and recent data has continued to disappoint. Uncertainties continue to weigh on the outlook and inflation continues to be muted, which sent the USD lower across the board. 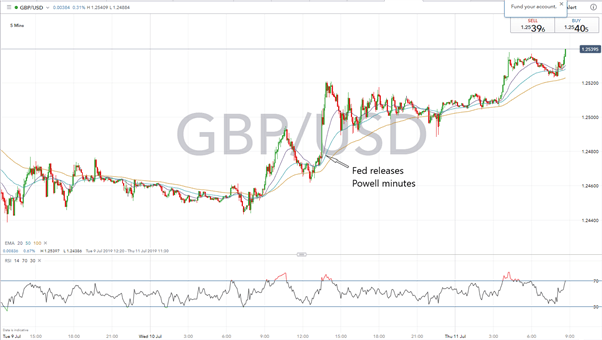 Despite Q1 GDP growth was 3.1% on an annualized basis, up from 2.2% in the last quarter of 2018 the increase was mainly led by exports and government spending, as domestic demand slowed to 1.3%, its lowest level since 2013. Growth in the second quarter is expected to have slowed as uncertainties about the outlook of the economy have increased in recent months.

When asked about what the Fed will be basing their future rate decisions, Mr. Powell pointed out that many figures will be looked at, with labour, Q2 GDP, CPI and retail sales data all coming out before the end of the month, when the next meeting takes place. He also pointed out that the Fed is looking at the effectiveness of their inflation target as inflation has remained below the 2% target for the last few months, inconsistent with their goal of creating a symmetry around 2%.

Key focus will be on inflation figures released on Thursday at 1230 GMT with expectations that price growth will have slowed, with the yearly figure expected to drop from 1.8% to 1.6% in the month of May. Considering the commentary made on Wednesday by the Fed we could expect inflation to be lower, even below estimates, but the reaction in USD pairs may be subdued on the basis that the pre-warning issued on Wednesday could have taken most of the hit on the dollar.

Sterling has continued to be held on short positions throughout the last few months as Brexit uncertainty continues to weigh on the outlook of the economy. Net short contracts equate to $5bn, its highest level since 2018 as investors are betting that the BoE will follow other central banks in cutting rates before the end of the year.

But some still believe that the BoE is due to increase rates in the near term as inflation is behaving relatively well. But the battle for next prime minister is going to continue to weigh down on the outlook of the British economy with potentially lower figures for growth and inflation, which would feed into the need to cut rates. And on Wednesday afternoon BoE policymaker Silvana Tenreyro squashed hopes of those expecting a rate hike as she said that there is no inflationary pressure to warrant the need for rate hikes, even if a successful Brexit deal is reached in the next few months. A successful Brexit outcome would increase the value of the pound, which would in turn reduce inflationary pressure and the need to apply restrictive measures.

An issue will arise if we continue to see stable and high inflation with no spill over into the jobs market, and growth continues to lag. Such factors would give into a period of stagflation, where unemployment picks up as prices continue to rise.