Of note, unfortunately, charts have not yet been updated. 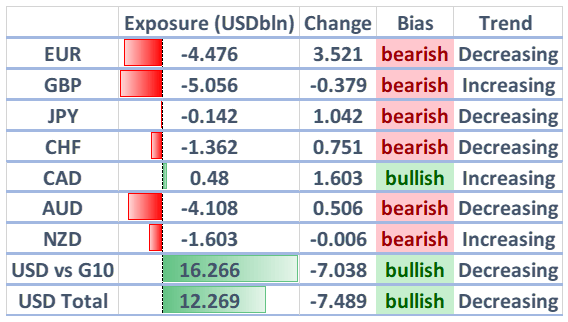 Speculators have continued to slash its bullish positioning in the USD, cutting longs against G10 currencies by $7bln to $16.26bln, marking the lowest level since July 2018. Consequently, Euro shorts were squeezed with net shorts decreasing by $3.5bln to $4.47bln, as such, net positioning adjusted for open interest is now at the lowest since October 2018.

Across commodity currencies, the CADhas flipped to bullish for the first time since March 2018 with gross longs surging to 45k contracts from 25k. This has largely been due to firm Canadian data continues to buoy the currency, which in turn has raised scope for the BoC to maintain a neutral stance and upgrade its economic projections at the upcoming monetary policy decision.

GBPshorts have continued to rise as risks of a no-deal rise, while weak UK data, coupled with an increase in dovish commentary from the BoE has pressured the Pound, which hovers around 2019 lows. Consequently, speculators are the most bearish on the currency since October 2018 with net short contracts equating to $5bln, marking the largest short within the G10 space.