CAD: Canadian Dollar continued to its grind higher against the greenback, hitting a fresh 2019 high. With the Fed preparing the markets for monetary policy easing, compared to the Bank of Canada holding fire on the side-lines, 2yr rate differentials between the pair have narrowed to its tightest since Q1 2018, in favour of CAD, while oil prices have pushed higher. Consequently, with these factors in play risks remain tilted to the upside for further gains in the Loonie vs the USD.

CHF / JPY: If you want another reminder of that the global economy is slowing, look no further than the latest GDP report from Singapore, which showed a surprise contraction of 3.4% against expectations of +0.1%, while the annualised rate dropped to lowest level since 2009 at 0.1%. Consequently, safe haven currencies have benefitted and most notably the Swiss Franc, which has broken below 1.1100. However, beware of SNB intervention if losses in the cross extends.

TRY: Geopolitical risks are once again on the rise with the threat of potential sanctions increasing as Turkey announces that the first major cargo of its Russian missile defence systems has been delivered. Given that it is likely to warrant a response from the US, the Turkish Lira has been on the back-foot with the currency spiking lower after reports stated that the US will address the situation at 16:15 London time. USDTRY weekly highs situated at 5.79. 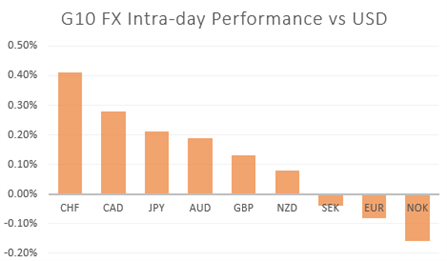