The trend of declining volatility across FX markets has shown little signs of reversing, given that our G7 currency 1-month implied volatility index is hovering near the lowest level since 2014. One of the reasons we see behind the move has been due to the subdued nature of equity market volatility (full analysis). Elsewhere, the well-telegraphed communication that central bank easing will be on the way, particularly from the Federal Reserve and ECB has also contributed to putting a lid FX market volatility. However, given the deteriorating outlook regarding the global economy, with implied volatility nearing 2014 lows, there is a risk that the market could be somewhat complacent and thus there is a vulnerability to a spike in volatility. 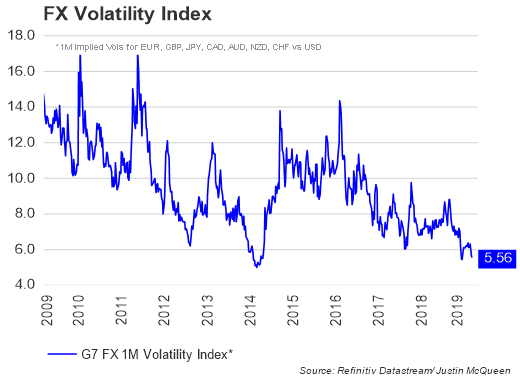 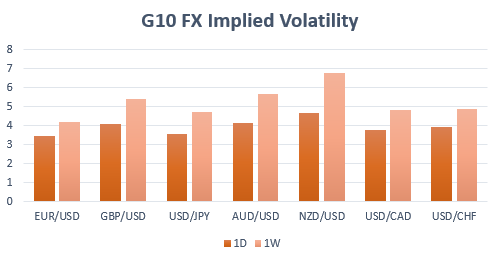 NZD: The New Zealand Dollar is expected to be the most volatile currency over the course of next week with 1-week implied vols at 6.8. However, with that said, implied volatility in NZDUSD is only 0.9vols off the 2019 low.

For Kiwi traders’ eyes will be on the NZ inflation report (15th July) for the second quarter, where expectations are for a slight lift to 1.7% from 1.5%, alongside this, the RBNZ’s preferred measure of inflation (sectoral factor) will also be released, as such, this will be key as to whether there is increased scope for further monetary easing from the central bank in the near term. As it stands, money markets have attached at 72% chance of a 25bps rate cut at the August.

Elsewhere, focus will be on the latest Q2 growth figures from China, whereby the headline figure is seen dropping to 6.2%, which would mark the worst quarterly rate of growth for China in roughly 30yrs. Although, while this would be within the Chinese governments target range of 6-6.5% growth, this will continue to raise concerns over the health of the global economy, thus keeping gains in high beta currencies (AUD, NZD) contained.

NZDUSD 1-week ATM break-evens imply a move of 56pips(meaning that option traders need to see a move of at least 56pips in either direction in order to realise gains). Risk reversals are neutral at -0.025, suggesting that the pair could remain rangebound, however, there is a risk that implied vols are under-pricing the risk of next weeks events given that realised volatility (fair value) has been notably higher at 9.04vols than implied volatility 6.8vols.

GBP: A raft of tier 1 data from the UK is due to be released, in the form of employment, inflation and retail sales figures, althought, while GBP implied vols are higher than the majority of its G10 counterparts, 1-week tenors are only 0.5vols above the YTD low. GBPUSD 1-week ATM break-evens imply a move of 85pips. Given that UK data is largely on the sidelines wth Brexit the main focal for GBP. US data may play a more important role in influence GBPUSD amid the influence that it will have on Fed monetary policy going forward, thus eyes will be situated on the US retail sales report. 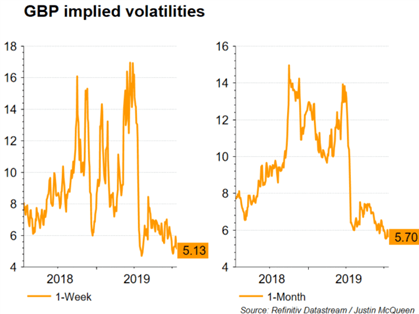