The Australian Dollar was already falling on Monday and news that China’s private manufacturing sector output contracted last month only added to it.

June’s Purchasing Managers Index from Chinese media company Caixin came in at 49.4. That was below both the 50.1 expected and the 50.2 seen in May. Worse, it was also under the key 50 level which separates expansion form contraction. June thus provides first sub-50 print since January.

The data chimed with official PMI numbers released on Sunday from larger, state-connected firms. That came in at 49.4. It’s clear that China’s manufacturing base continues to loose steam as trade rapprochement with the US remains elusive.

Caixin said that output and new work intake declined for the first time since January, with more falls in export sales and a cutback in both purchasing and payroll numbers.

The Australian Dollar can act as the market’s favorite liquid China proxy and seems to have done so in this case. However, AUDUSD has been sliding well before the data as markets in Asia began to doubt the substance of the trade truce between Beijing and Washington seen at last weekend’s Group of 20 meeting in Japan. The weak Caixin data didn’t make its plight much worse. 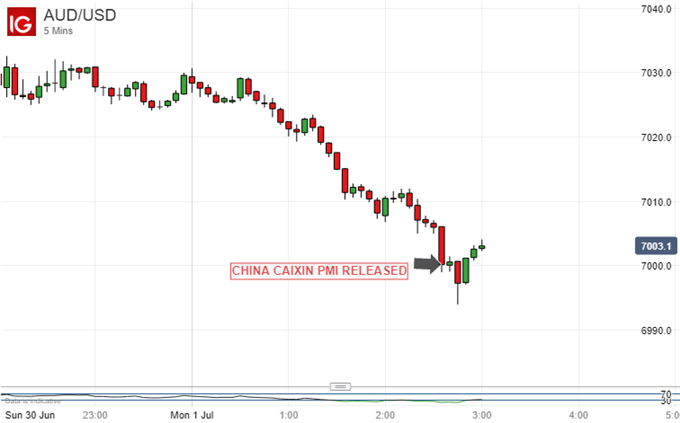 On its daily chart the Australian Dollar has risen since late June thanks to a couple of supportive factors. The clearest of these was probably broad US Dollar weakness. The markets moved last month to price in lower interest rates from the Federal Reserve. This prospect in turn engendered a revival in risk appetite, something which also helped the Australian Dollar, linked as its fortunes are to global growth prospects..

Still, the currency utterly lacks interest rate props of its own, with borrowing costs at record lows and thought likely to go lower yet by the market. Admittedly there are some signs that the Reserve Bank of Australia would be uncomfortable with deep rate cut, and they may at the margin be offering AUDUSD some support. 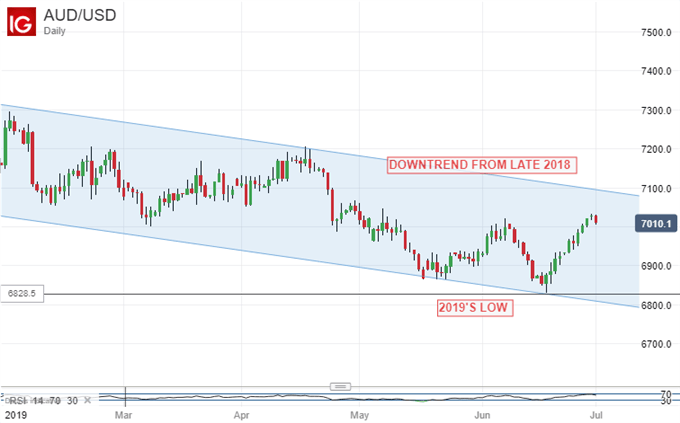 Still, for the moment focus remains on the US unit and, while it does, the Aussie’s uptrend will probably endure.