Eurozone unemployment at lowest level since 2008, EURUSD to watch US ISM data

An upbeat German unemployment change figure managed to curb EURUSD losses this morning as the pair traded softer throughout most of the Asian session on the back of a “cease-fire” on Sino-American trade wars. Unemployment fell by 1k in the month of June easing some of the pressure last month’s downbeat figures placed on the growth forecasts for the country, but markets had expected a greater reduction of 3k.

The 1k fall in unemployment proved to be enough to convince the EURUSD bulls to push the pair higher. The Asian session started with large drops as the pair reached 1.1317 at the start of the European session, it’s lowest level since June 21. After an initial drop when the figures were released the pair managed to push higher to 1.1331 where it continued to trade as Eurozone unemployment figures were released. Despite unemployment being lower than expected and at its lowest level since 2008, the figure failed to induce a big move in the market 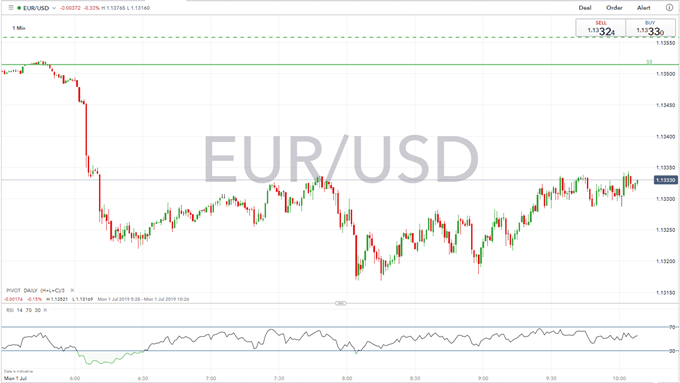 Despite employment figures in Germany having returned to their “normal” positive side after unemployment in May unexpectedly jumped by 60k, the reduction in this month’s unemployment change still doesn’t prove that the German economy is improving. After the figure soared last month we could have expected to see unemployment change fall by a much greater numbers, seeing as the average fall in unemployment in the 10 months prior to May’s increase was 12.3k.

Last month’s jump marked its biggest rise since 2009, a big contrast to the figures released in April which showed that the unemployment rate was at its lowest in 30 years at 4.9%. The rise in unemployed sparked concerns as the EU’s largest economy had previously halved its growth forecasts for 2019, reflecting a worsening of the economy and general slowdown in the Eurozone led by a recession in the manufacturing sector. Unemployment in the Eurozone fell to 7.5% in May, down from 7.6% in the previous month.

The manufacturing industry continues to slow

Also released this morning were manufacturing PMIs which came in lower for Italy, France, Spain, Germany and the Eurozone, proving that the industry continues to struggle as all readings, except for France’s, come in below the 50 line which marks a contraction. The worst figure continues to be from Germany at a reading of 45, specifically worrying as it currently stands as the Eurozone’s largest economy, but it relies greatly on the manufacturing export industry.

US ISM manufacturing and employment data out later today could see big moves for EURUSD as markets continue to look for results from recent trade wars. A worse than expected reading could correct the pair’s current downtrend and return to levels close to 1.1360, and a better than expected reading could see further confidence in USD pushing the pair lower and below the 1.1300 line.

Figures released last week saw Eurozone headline inflation remained unchanged at 1.2% whilst core inflation bounced back to 1.1%, up from 0.8% in the previous month. The better than expected figures may have eased off some of the pressure the ECB faces to continue to reduce interest rates to induce monetary stimulus, but the figure is still well below the 2% target and considering that monetary stimulus has been in place for some time one would expect inflation to be at, or much closer to, 2%.