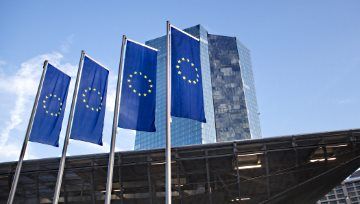 EURUSD was pushing higher this morning on the back of a weaker USD after comments made by Donald Trump about international trade showed a weaker tone towards the G-20 meeting between Mr. Trump and Xi Jinping to be held on Saturday. The pair traded in a tight 15-pip range overnight as investors awaited developments on trade talks to consolidate a direction, but comments made by Mr. Trump set a negative tone in anticipation of tomorrow’s meeting which put downward pressure on USD at the start of the European trading session.

EURUSD and Risk Asset Wind Up Before G-20 Summit

Better than expected inflation figures for France released at 0645 GMT helped jump-start EURUSD’s uptrend taking it past 1.13750 after which it continued climbing to 1.1391, where the pair continued to trade when core inflation in the Eurozone surprised higher at 1.1% (exp. 1%), as prices remain volatile jumping above and below the 1% mark in the last few months. 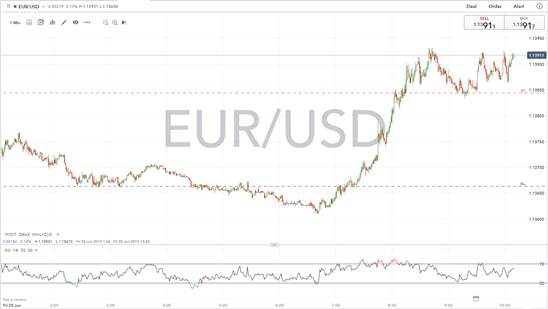 We can expect increased volatility in FX pairs over the weekend as G-20 meetings unfold. USD pairs will remain especially sensitive to any news about trade talks with a notable upswing in trade sensitive currencies (AUD, NZD) if a trade deal is reached. Any negative sentiment surrounding Trump and Jinping’s meeting will continue to push the dollar lower with the potential for EURUSD to close above 1.1400 (50% retracement) near the March-high of 1.1448 as it continues to create higher highs and higher lows. A bearish outlook could send the pair below the 1.1351 support line.

Eurozone headline inflation remained unchanged at 1.2% whilst core inflation bounced back to 1.1%, up from 0.8% in the previous month. The better than expected figures may ease off some of the pressure the ECB faces to continue to reduce interest rates to induce monetary stimulus, but the figure is still well below the 2% target and considering that monetary stimulus has been in place for some time one would expect inflation to be at, or much closer to, 2%.

Preliminary inflation figures for France were positive across the board as YoY CPI was 1.2% in June, up from 0.9% the previous month and MoM inflation was 0.2% beating expectations of no growth at all. Harmonized ICP, which compares a country’s inflation figure to those of the members of the EU, was higher both in the monthly and yearly figure, coming in at 0.3% and 1.2% respectively.

A preliminary reading for German CPI showed that monthly inflation increased to 0.3% in the month of June, up from 0.2% in May, with the yearly figure at 1.6%, up from 1.4% in May and above expectations of 1.4%. The Harmonized ICP was unchanged from the previous month figures, coming in at 0.1% MoM and 1.3% YoY.

Prices in Spain fell 0.1% in June compared to the month of May as YoY inflation drops to 0.4%, its lowest level since November 2016. The drop-in prices comes on the back of cheaper energy bills, in contrast to the rise they experienced this time last year. Yearly inflation was expected to be unchanged from the previous month’s figures of +0.8% and no changes in prices were expected from the month of May (Exp. 0%).