Asian Stocks Applaud US-China Trade Truce, FX Not Quite So Sure

Find out what retail foreign exchange traders make of your favorite currency’s chances at the DailyFX Sentiment Page.

Most Asian stocks surged into Monday, boosted by an accord reached between Beijing and Washington at the weekend’s Group of 20 summit in Osaka. China and the US have agreed not to levy any further tariffs on each other’s goods.

This is a long way short of any sort of trade deal, of course, and the economic data released throughout the session were weak. Still investors seem inclined to cling to the positive G20 news.

The Shanghai Composite was up by 1.8%, with the Nikkei 225 up by a similar amount in the middle of the Tokyo afternoon. The ASX 200 climbed 0.5%, with only Hong Kong’s Hang Seng missing out on gains.

These gains came despite the release of a Tankan survey from the Bank of Japan showing confidence at domestic manufacturers near three-year lows. There was more bad news from China, where private sector manufacturing output was found to have contracted in June, as indeed had larger, state-run concerns according to data released on Sunday.

Growth sensitive currencies failed to share stock markets’ enthusiasm for events in Osaka. The Australian Dollar and the New Zealand Dollar were both lower, possibly undermined by that weaker Chinese data. The Yuan made gains however, as did crude oil prices, at least initially. Saudi Arabia, Russia and Iraq backed a six-month extension to production cuts from OPEC last week.

USDJPY meanwhile has broken above its previous daily-chart downtrend channel, but has hardly done so conclusively yet. 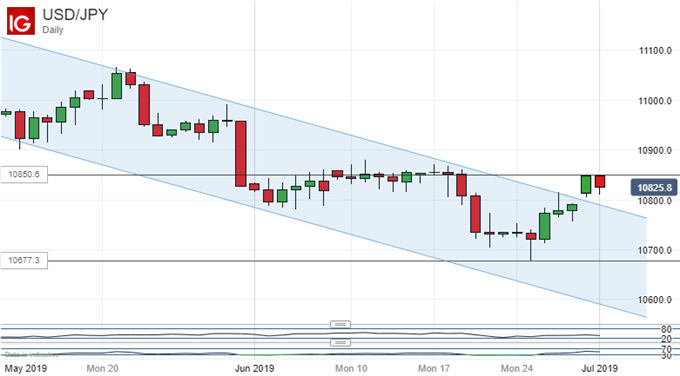 The pair has failed so far to top its previous significant high and investors should probably be wary of reduced liquidity across the currency complex as the week goes on.

The US Fourth of July break is of course coming up, but focus for the rest of Monday will probably be on German employment data and the Institute for Supply Management’s manufacturing and employment figures from the US.