See our quarterly gold forecast to learn what will drive prices throughout Q2!

Gold prices have rallied over 10% in the past 4-weeks and set to record the best month in 3yrs amid the Federal Reserve U-Turn. Gains had been further exacerbated following last week’s break above key technical resistance in the form of the 5yr trendline, which had previously capped rallies in the precious metal.

As US data continues to underperform relative to market expectations, this further emboldens the case that the Federal Reserve will ease monetary policy with the main focus as to whether the central bank delivers a 25 or 50bps cut at the July 31st meeting. As such, with global central banks hinting at fresh policy stimulus (namely the Fed and ECB) bonds yields have continued to drop with the pool of negative yielding debt at a record high. In turn, this lowers the opportunity cost for holding gold over bonds, thus making the precious metal more attractive. Key focus for the near-term direction of gold will be dependent on commentary from Fed Chair Powell at 1800 London time (calendar).

Overnight, gold prices had been delivered a further boost, sparking a move towards resistance at $1430-35 as tensions in the Middle East escalated further, following the Trump administration’s decision to place sanctions on the Iranian Supreme Leader, which in turn saw Iran state that the path of diplomacy between the US and Iran has been closed.

While gold prices have exploded higher since the Federal Reserve confirmed the U-Turn in Monetary Policy, the precious metal however, is the most overbought in 30yrs as signaled by the daily relative strength index (14D), while on the weekly timeframe the RSI is the most overbought since August 2011. Consequently, this leaves the precious metal at risk of a pullback before another leg higher. 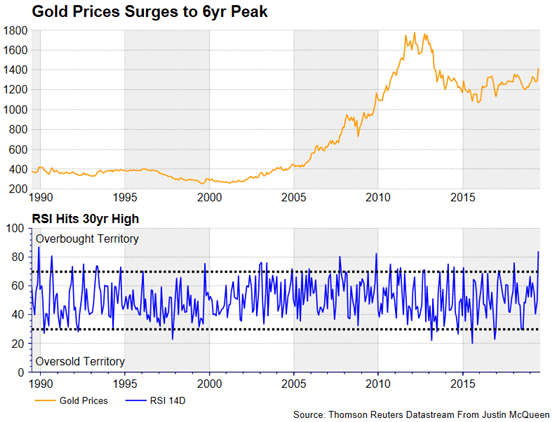 Gains in silver prices have stalled around the psychological $15.50 level, which provides a risk of a slight pullback. However, with the gold/silver ratio at 92.5 (meaning that it takes 92 ounces of silver to buy 1 ounce of gold), which is the highest in 30yrs, risk reward looks more attractive for silver over gold in the near-term. Thus, there is increased scope for a test of the $16 handle in the longer run.